The chief executive of IDA Ireland Martin Shanahan has said that that tax reform in the US should have a 'minimal impact' on FDI in Ireland. Video Joe Brennan 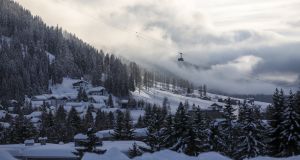 Taoiseach Leo Varadkar will on Thursday host an event for 70 people, mostly senior executives, at the ski resort. Photograph: Bloomberg

The Republic is eyeing an opportunity to court foreign direct investment that might previously have gone to the United Kingdom, as it plays a second angle on Brexit, according to the chief executive of IDA Ireland.

Speaking to The Irish Times at the World Economic Forum in Davos, Martin Shanahan said that Ireland is well placed to win more business as the UK’s share of foreign direct investment appears to be shrinking as the country prepares to exit the European Union.

Mr Shanahan said that 16 financial firms have announced their intentions to expand in the Republic following the Brexit referendum and the IDA is in talks with more than that number again about securing further activities. Still, he said that the UK will continue to be a major hub for international finance.

IDA is meeting more than 40 international companies over three days in Davos, including firms with activities in the State and those looking at the market, according to Mr Shanahan. Taoiseach Leo Varadkar will be involved in some of the meetings on Thursday before hosting an event at the Swiss ski resort, which will be attended by about 70 people, mainly senior executives at multinationals.

“This is my fourth Davos and if you look back 12 months ago, there was an air of optimism among North American CEOs around the advent of tax reform and, now that’s happened, it’s probably adding to the positivity,” said Mr Shanahan. “The fact that other economic blocks are performing well at the moment also helps.”

The International Monetary Fund said this week it expects the global economy to grow by 3.9 per cent this year and next, helped by US tax reforms signed into law, which include cutting the main corporate rate from 35 per cent to 21 per cent.

While Mr Shanahan said that while the US tax overhaul makes that country more competitive and may prompt companies “to do things in the US rather than go abroad,” the IDA’s investment pipeline remains “very strong”.

1 Ireland stands to benefit in a big way from investing in public transport
2 ‘The recovery needs to be a full-scale economic renewal’
3 Ryanair expects air fares to fall when flights take off again
4 Small businesses are cannon fodder in zealous anti-virus experiment
5 Michael Smurfit: ‘I asked Trump to invite me to the White House for my 80th birthday’
6 Joint accounts: if one of us dies, can the other access the money?
7 HSBC board rethinks overhaul and seeks even deeper cuts
8 Four things that could help Ireland escape from the Covid-19 recession
9 Brexit, coronavirus and bark beetle pose challenges for Coillte
10 Tax and the Pandemic Unemployment Payment: Your questions answered
Real news has value SUBSCRIBE