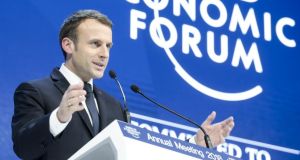 French president Emmanuel Macron said countries were “moving back to strategies of non-co-operation, undoing what globalisation has been able to achieve”. Photograph: Jason Alden/Bloomberg

“Let us not be naive. Globalisation is going through a major crisis and the challenge needs to be collectively fought by states and civil society in order to find and implement global solutions,” Mr Macron said. “I want to come here to make a call to action.”

Mr Macron, who swept to power last year after defeating right-wing politician Marine Le Pen with a promise of economic reform, said that countries were “moving back to strategies of non-co-operation, undoing what globalisation has been able to achieve”.

Earlier, German chancellor Angela Merkel told the annual WEF gathering in Switzerland the European Union needed a common foreign policy as it grappled with protectionism in other parts of the world, the question over ownership of digital data – which she referred to as the “raw material of the 21st century – migration and other major issues.

Taking time away from efforts to create a new German government, Ms Merkel used a keynote address in Davos on Wednesday to urge other global leaders to pursue “multilateral” responses to international problems, saying the rise of populist parties in Europe was a “poison”.

“We see populism in many states – a polarising atmosphere,” said Ms Merkel. “We are seeing polarisation in our country, which we haven’t had in decades.”

The German leader said that while it was “regrettable” that citizens of the UK decided to leave the EU, “this has almost encouraged us to look at the big issues”. The election last year of Mr Macron had added “new impetus” to this effort, she said.

The comments from Europe’s two most senior political figures are seen as a veiled rebuke against Donald Trump’s “America First” nationalist policies, ahead of the arrival of the US president at Davos, where he is scheduled to deliver a much-anticipated address on Friday.

Mr Macron echoed themes voiced by Canadian prime minister Justin Trudeau when he addressed the WEF on Tuesday, pressing corporate leaders to find a “moral way to make profits” and pay their fair share of taxes, rather than using loopholes to shift profits.