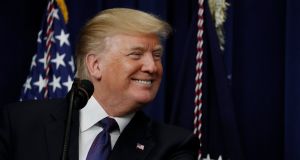 Environmental risks top the list of risks facing the world, according to a report published ahead of the global elite, including climate-change sceptic US president Donald Trump, gathering in Davos next week.

The annual report - drawing on the responses of 1,000 respondents- shows that global experts and decision-makers are also more concerned about cyber-security risks and military conflicts between countries than when they assembled a year ago in the Swiss ski resort. It also cautions that the world is struggling to keep up with the accelerated pace of change and how interconnected risks are.

“Whether it’s the environment, cyber-security, economics or geopolitics, the overarching thing is the pace of change in all of these areas and their interconnections,” said Aengus Collins, an Irish economist and lead author of the WEF Global Risks Report 2018, published on Wednesday. “You just have to look at the huge cyber-attacks we saw last year and how quickly they spilled over and had economic and societal effects.”

Last May, a global cyber attack affected 150 countries, including the UK where the health service was hit, as hackers demanding a ransom infiltrated 300,000 computers across banks, companies and government agencies.

Cyber-attacks now rank third to extreme weather events and natural disasters as the third most likely risk facing the world, according to results of the latest survey, as concerns over the economy take a back seat as global growth is now occurring at its most widespread pace since the financial crisis erupted a decade ago.

Attacks against businesses have almost doubled in the last five years, with incidents once considered extraordinary are now becoming more and more commonplace, according to the report.

Mr Trump will be the first sitting US president to visit the annual meeting in the Alps since Bill Clinton in 2000, with aides saying the Republican will use the opportunity to pursue his “America First” agenda. Organisers of the conference - taking place between January 23rd and 26th and themed “creating a shared future in a fractured world” - said on Tuesday that Mr Trump will deliver the closing address to the gathering.

Mr Trump’s move last year to pull the US out of the Paris Agreement on tackling climate change is the biggest snub he has delivered to the global community since his inauguration 12 months ago.

Meanwhile, with the Davos conference occurring against the backdrop of ongoing tensions between the US and North Korea and concerns among Russia’s neighbours about the country’s intentions, 80 per cent of respondents to the WEF survey said that the risks of “state-on-state military conflict” and “regional conflicts drawing in major power(s)” are higher this year than in 2017.

French president Emmanuel Macron, British prime minister Theresa May are among world leaders due to attend the conference, with German chancellor Angela Merkel also speculated to be considering travelling to it, alongside celebrities such as actress Cate Blanchett and musician Elton John and a list of corporate chief executives.

At a global level humanity faces a growing number of systemic challenges, including fractures and failures affecting the environmental, economic, technological and institutional systems on which our future rests.

German-born Klaus Schwab, founder and executive chairman the WEF, which has met in Davos every year since 1971, said in the risks report that “encouraging signs suggest that we have put the worst financial crisis of the post-World II period behind us”.

However, he added that the “acceleration of interconnectedness in every field of human activity” is pushing individuals, communities and institutions “to their limits”.

“This is putting future human development at risk,” he said. “In addition to dealing with a multitude of discrete local problems, at a global level humanity faces a growing number of systemic challenges, including fractures and failures affecting the environmental, economic, technological and institutional systems on which our future rests.”