Davos: Warnings on the next financial crisis 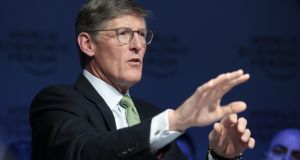 Michael Corbat, chief executive of Citigroup: “If the turn comes, and it will come” on financial markets, the risk is that it “will be more violent”

Investors’ moves to shrug off the US government shutdown over the weekend represented another “concerning” sign of ambivalence among investors about risks on the horizon, according to Citigroup chief executive Michael Corbat.

Speaking during a panel entitled The Next Financial Crisis at the World Economic Forum (WEF) in Davos, Mr Corbat said investors’ current reticence to sell on bad news was understandable as those who exited the market following the Brexit referendum and Donald Trump’s election as US president in 2016 had to pay more to get back in.

“If the turn comes, and it will come” on financial markets, the risk is that it “will be more violent”, Mr Corbat said during the panel debate on where the next financial crisis is likely to come from.

Harvard economics professor Kenneth Rogoff warned that if inflation spiked suddenly, central banks globally would have to raise rates faster than expected, potentially hitting equity markets. “If we have another financial crisis there isn’t even a plan A” with regard to what central banks would do.

The comments came as the Dow Jones Industrial Average on Wall Street this week reached its 80th high in the space of a year, helped as the global economy enjoys its broadest pace of growth since 2010.

The International Monetary Fund this week raised its global growth forecast for this year and next by 0.2 percentage points respectively to 3.9 per cent, helped as Mr Trump signed a $1.5 trillion (€1.2 trillion) tax overhaul into law last month, marking the biggest legislative victory of his first year in office.

While 1,000 respondents to a global risks survey by the WEF before Davos highlighted geopolitical risks and the environment as key concerns among political and business leaders, Anne Richards, chief executive of M&G Investments in the UK, said systemic risks around technology were more worrying than geopolitical events.

“It’s the interconnectivity – the amount of stuff we put in a shared space,” said Ms Richards. “All of our businesses would stop if, for some reason, and for something we don’t understand…[people were unable] to access wifi-based systems, cloud-based systems.

“What if suddenly all cell phones went down simultaneously? What if none of us could actually trade for one or two or three days.”

Ms Richards, whose firm has £281 billion (€248bn) of assets under management, said if stock markets pulled back it “could actually be quite a severe correction”.