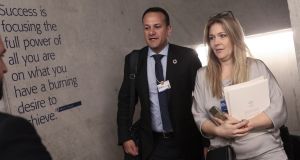 Taoiseach Leo Varadkar has said that he doesn’t think that there is a bubble in the Dublin commercial property market.

Mr Varadkar was responding to comments from businessman Denis O’Brien that there is an unsustainable level of development in the capital.

“I don’t thing there is [a bubble ],” Mr Varadkar said at the World Economic Forum annual conference in Davos. “But we have to be wise to these things.”

Mr O’Brien said that the current boom in the market is unsustainable: “Every time I come back to Dublin I’m staggered that there’s a new crane. I actually think we’re overbuilding offices and there won’t be enough people to put in them, ”

Mr Varadkar went on to say, however, that he is “concerned” when he hears calls for “more public spending [and ]tax breaks for developers” as the Republic is only now recovering from a “lost decade”. Only now is the State in a place where the budget is balanced and private and public debt is falling.

He said that demand for office space is being driven by growing economic activity in Ireland and the fact that Ireland expects, and is seeing, an “expansion in commercial activity, post-Brexit”.

Mr Donohoe said that the Government moved last year to triple the stamp duty on commercial property to “ensure that pricing that can happen in the future would be more justified, more impacted by tax policy and also to begin the process of moving human and economic capital out of commercial property into building homes for our people”.

Business group Dublin Chamber also questioned the basis for Mr O’Brien’s Davos comments, saying the take-up of Dublin office space was being driven by the technology, media and telecommunications sectors, with only a modest portion of activity related to Brexit.

On Brexit, Mr Varadkar said that the best way for the United Kingdom and European Union to resolve trading issues is through a “very close” agreement, which he said is “possible” with a “very big proviso” that it accepts necessary responsibilities and obligations.

“I think the final agreement that we will come to between the UK and the European Union is not going to be identical to the agreement that exists with Norway or Canada. Norway’s a small country. Britain’s a huge country. Canada isn’t even on the continent of Europe - so it’s going to be different,” he said.

1 Should my mam wait for house prices to drop before buying?
2 Two prominent business leaders in planning row with neighbour
3 Cheers: Conor McGregor's whiskey races up the sales chart
4 ‘I’m so lucky to be in the Caribbean – a million miles from Derry Girls’
5 Joint accounts: if one of us dies, can the other access the money?
6 Chris Johns: Past is another country when it comes to our post-pandemic future
7 Global stocks climb near three-month highs as rebound hopes grow
8 Battle for control of America’s mammoth utility industry set to intensify
9 ‘The recovery needs to be a full-scale economic renewal’
10 Citigroup warns that markets are out of step with reality
Real news has value SUBSCRIBE