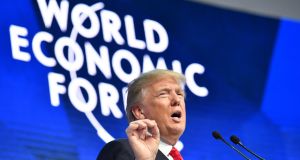 US president Donald Trump told the World Economic Forum (WEF) annual conference in Davos on Friday that his “America First” agenda does not mean “America alone”, seeking to ease concerns among the so-called global elite about his protectionist policies.

“When the United States grows, so does the world,” Mr Trump said in a keenly awaited closing address of the four-day gathering of 3,000 political and business leaders, academics and journalists in the Swiss ski resort. “I am here to represent the interests of the American people and to affirm America’s friendship and partnership in building a better world.”

Mr Trump said that as the US pursues domestic reforms, “we are also working to restore the international trading system” so that it promotes broadly shared rewards.

“We cannot have free and open trade if some countries exploit the system at the expense of others,” he said. “We support fair trade that needs to be fair and needs to be reciprocal. The United States will no longer turn a blind eye to unfair economic practices, including massive intellectual property, industrial subsidies, and pervasive state-led economic planning.”

“These and other predatory behaviours are destroying the global markets,” he said.

The US president’s comments about intellectual property theft were seen as a broadside to China. He said last week that he was considering a big “fine” as part of a probe into such alleged practices by the Asian country.

Mr Trump surprised the international community earlier this month when he announced that he would attend the WEF conference in Davos, the first sitting US president to do so since Bill Clinton in 2000. The annual event is seen as the home to “globalists” and elites, who the president has railed against while pushing his “America First” agenda.

Introducing the president before a packed audience in the convention centre in Europe’s highest town, the WEF’s founder, German engineer and economist Klaus Schwab, told Mr Trump that “strong sovereign nations, with different values and different cultures and different dreams, do not just coexist, but work side by side on the basis of mutual respect”.

Mr Trump’s isolationist policies, including a move earlier this week to slap tariffs on imported washing machines and solar panels, had hung heavily over debates and speeches at the 48th WEF gathering, as Davos awaited the US president’s address.

Mr Trump, who flew into Switzerland on Thursday amid tight security, highlighted in his speech the current strength of the US economy, the fact that Wall Street shares have reached new highs 84 times since his election in 2016, and that “America is open for business”.

“The world is witnessing the resurgence of a strong and prosperous America,” he said. “I’m here to deliver a simple message: there has never been a better time to hire, to build, and to grow in the United States.”

He called on foreign businesses to “come to America”.

“As president of the United States, I will always put America first, just as the leaders of other countries should put their countries first also. But ‘America First’ does not mean America alone.”

He said that “only by insisting on fair and reciprocal trade can we create a system that works not just for the US but for all nations.”

Mr Trump highlighted at one stage during the speech how tax reforms signed into law last month – cutting the main corporate rate to 21 per cent from 35 per cent and offering a once-off 15.5 per cent rate to companies repatriating overseas cash – has prompted Apple to decide to transfer $245 billion back to the US.

Much of that cash was once held by an Irish arm before the iPhone maker moved the residency of that unit to Jersey at the end of 2014. That was the result of tax law changes in Ireland in 2015, meaning Irish-registered companies could no longer be “stateless” for tax purposes.

US equities rise as economic stimulus overshadows unrest 14:46
Finance chief who guided Tesco out of scandal to retire 14:05
France won’t raise raise taxes even with 11% contraction 13:52
New car sales plummet 72% in May despite dealers re-opening 13:33
Parts of Brown Thomas and Arnotts to reopen next week 13:12

1 Parts of Brown Thomas and Arnotts to reopen next week
2 Should my mam wait for house prices to drop before buying?
3 Hangover for the drinks sector as pint sales go flat
4 Brother is dragging his heels as executor of uncle’s will - is there anything I can do?
5 Supermarkets see fastest pace of sales growth in 15 years
6 Covid-19 mortgage breaks: What’s the catch?
7 Finance chief who guided Tesco out of scandal to retire
8 Revenue faces US drug company Perrigo over disputed €1.64bn tax bill
9 British consumers ramp up repayments amid Covid-19 lockdown
10 Irish whiskey sales near milestone of 12m cases a year
Real news has value SUBSCRIBE