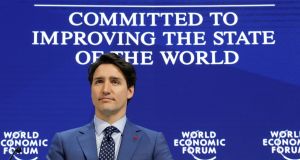 Canadian prime minister Justin Trudeau held a mirror up to corporate leaders at the World Economic Forum in Davos, tackling the issues of gender and corporate greed.

“Here’s the big one: ‘Me To’,’Time’s up’, ‘the women’s march’. These movements tell us we need to have a critical discussion about women’s’ rights and equality and the power dynamics of gender,” Mr Trudeau told delegates on Tuesday, the first of a four-day gathering in the Swiss ski resort, adding that sexual harassment is an “unacceptable” systemic problem in business and in politics.

“Hiring and promotion and retention of women is something we can make happen today, right now,” the Canadian premier said in a keynote speech to the conference, which has been often been criticised for cementing the status quo. Only a fifth of the 3,000 participants at the event are women, according to its organisers.

Mr Trudeau quoted a report by management consultancy firm McKinsey, which estimates that the Canadian economy could be boosted to the tune of Canadian $150 billion by 2026 if the gender gap were closed.

“I’m talking about hiring, promoting and retaining more women… not just because it’s the right thing to do or the nice thing to do – but the smart thing to do,” he said.

“Too many corporations have single-mindedly put the pursuit of profit before the wellbeing of workers and the gap between the rich and the poor is staggering,” he said, adding that companies boost profits by avoiding taxes and undercutting workers, which is unsustainable.

While companies globally are concerned about the impact of technology and artificial intelligence on their businesses, Mr Trudeau said: “If you’re anxious, imagine how the folks who aren’t in this room are feeling.”

The address came on the same day that Canada and the remaining members of the Trans-Pacific Partnership agreed to a revised trade agreement, without the United States. The accord followed two days of high-level talks in Tokyo between Canada and 10 other countries.

“Our government stood up for Canadian interests and this agreement meets our objective of creating and sustaining growth and prosperity and well-paying middle-class jobs,” Mr Trudeau told the Davos audience.