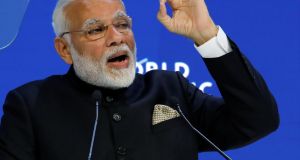 Indian prime minister Narendra Modi: global leaders should show solidarity in the face of challenges such as climate change.

Indian prime minister Narendra Modi shied away from domestic issues in his keynote speech in Davos, instead issuing a call for global leaders to “eliminate rifts” that pose social and even nuclear risks.

Citing “threats to global civilisation” as he made the opening keynote address at the World Economic Forum, Mr Modi said scientific and technological advances are “creating faultlines that can inflict a very painful wound. The rapidly changing technological and increased destructive forces have made our earlier challenges even more serious.”

Global leaders should show solidarity in the face of challenges such as climate change, he said.

How have we moved from a very frugal consumption ... to greed-based consumption? Our behaviour has been deteriorating, we are only focusing on our own happiness. We have to ask ourselves: has this been development or has this been our downfall?

Mr Modi, the first Indian prime minister to attend the WEF in more than 20 years, also promoted yoga as a way to connect with the environment and heal social ills.

Mr Modi is the first in a series of global leaders including Canada’s Justin Trudeau and Germany’s Angela Merkel whose collaborative stance is likely to form a sharp contrast to that of US president Donald Trump, who is scheduled to speak on the final day.

1 Michael Smurfit: ‘I asked Trump to invite me to the White House for my 80th birthday’
2 ‘I’m so lucky to be in the Caribbean – a million miles from Derry Girls’
3 ‘The recovery needs to be a full-scale economic renewal’
4 Tax and the Pandemic Unemployment Payment: Your questions answered
5 Ryanair expects air fares to fall when flights take off again
6 Minister calls on EU to act against tobacco firms ‘undermining’ menthol ban in Ireland
7 Household savings soar as consumers stop spending
8 Lioncor gets planning permission for ‘house of Europe’ project
9 Small businesses are cannon fodder in zealous anti-virus experiment
10 Joint accounts: if one of us dies, can the other access the money?
Real news has value SUBSCRIBE