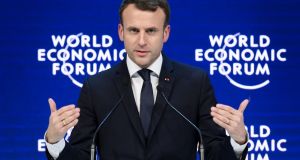 Globalisation is going through a “major crisis”, French president Emmanuel Macron said on Wednesday, making “a call to all and every one of us” to push back.

Mr Macron, who arguably takes second billing only to US president Donald Trump at this year’s Davos event, noted that he won his election against a nationalist candidate last year. He pinned nationalist populism on persistent unemployment and the projection of isolation as an easy solution to problems for those “who have been forgotten and left behind”.

“If we want to avoid this fragmentation of the world, we need a stronger Europe. It’s absolutely key,” he said.

He was speaking after a clutch of world leaders used their slots at the World Economic Forum in Davos to offer a spirited defence of globalism, in a rebuke to the protectionism of the US.

It is not only globalisation that is in crisis, Mr Macron said, but also “contemporary capitalism”, which he said “has become a capitalism of superstars” rather than sharing rewards more evenly.

Like Canada’s Justin Trudeau, he also called for greater commitment to gender equality.

France, he said, is changing a culture of always assuring the population that politicians will “protect you from change”. Sometimes, he said “we have to accelerate some change.”

He also weighed in on the European Union’s decision-making process, saying it should be reformed to enable some countries to move ahead with policies faster, he said. “Those that don’t want to move forward should not block the most ambitious people in the room,” he said.

“France is back. France is back at the core of Europe”, he said, to applause from a highly sympathetic audience. Tax reforms and other reforms aimed at fostering more innovation are designed to facilitate the country as “a nation of entrepreneurs,” he said.

“In France, it was forbidden to fail and forbidden to succeed. Now it should be more easy to fail, to take risk.”

He argued that the world should cast off its obsession with economic growth, which he said is “not an end in itself”. The pursuit of growth, which he described as inherently unequal, has helped fuel opposition to globalisation, he said.

Offering an animated defence of liberal global co-operation he said:

“In terms of trade, we are moving back again towards greater protectionism, greater fragmentation and we are undoing what globalisation has been able to achieve. In terms of climate change, we are losing the battle. How are we going to explain to people that they are going to be more vulnerable?”