Davos: Fashion gets a seat at the table

Sinead Burke will give talks on design, inclusion and disability 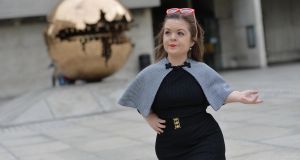 Sinead Burke is “a little terrified” about speaking at Davos.

This week, as billionaires, business executives, politicians and intellectuals arrive in Davos, Switzerland, for the annual World Economic Forum, the address by president Donald Trump scheduled for Friday is just one of the noteworthy features on the agenda.

Amid discussions on climate change and populism, the rise of robots and the booming global economy, will be a number of talks, papers and presentations from power players in fashion.

“We recognised the economic, social and environmental role of an industry that can sometimes appear trivial,” said Cristiana Falcone-Sorrell, senior adviser to Klaus Schwab, the forum’s chairman.

Celebrities have often added some sparkle to the mix (Cate Blanchett and Elton John will be in town this year to accept awards for their service to philanthropy), and luxury brand chief executives have been in the audience, but the fashion industry has never before had such a strong foothold in the agenda.

“We know that the fourth industrial revolution is disrupting fashion as much as it is disrupting other businesses,” Falcone-Sorrell said, “and that the industry is facing many challenges that need to be tackled in a systemic way.”

She said Davos organisers had considered inviting fashion leaders for an industry discussion but then decided to integrate them and their issues into the wider agenda, giving fashion topics a bigger presence on the main forum stage.

So the designer Stella McCartney, for example, will join Ellen MacArthur, an around-the-world sailor and environmental activist, to unveil initiatives designed to boost a circular economy, one that focuses on minimizing energy use and waste.

In late November the women joined forces in London to highlight a report by Ms MacArthur’s foundation that said the fashion industry creates 1.2 billion tons of greenhouse emissions a year – more than that produced by international flights and shipping combined.

Chen Man, a photographer credited by the forum with “revolutionising fashion photography in China,” also is scheduled to speak, as is the Irish activist and academic Sinead Burke. A frequent presence in fashion show front rows, Ms Burke in a bespoke wardrobe from Burberry, fitted to her 3-foot, 5-inch frame – will give four talks in three days on fashion design, inclusion and disability.

“From a disability perspective, the market equates to 1.3 billion people and has a spending power of $1.2 trillion,” Ms Burke said. “The voices of this community are often silenced within the design process and this blinkered approach results in minimized profitability, linear creativity, but most importantly, a more ableist society.”

She said she felt both humbled and “a little terrified” that her first visit to the forum has her speaking to delegates, but “hearing about Davos and the thought-leaders, political forces and business executives who attend each year reminds me of that lyric in Lin-Manuel Miranda’s Hamilton: “It’s ‘The Room Where It Happens’.”

And fashion has finally been invited inside.