An Italian hedge fund manager called Ireland's tax rate "a joke" at a conference on Paradise Papers in Davos. 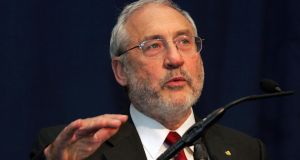 Minister for Finance Paschal Donohoe insisted at the World Economic Forum annual conference in Davos on Thursday that Ireland has no intention of being part of a tax “race to the bottom”, responding to criticism from a Nobel prize-winning economist that the Republic is part of a global tax avoidance problem.

Speaking on a panel discussing how tax avoidance and evasion globally, Columbia University professor Joseph Stiglitz said that European Commissioner Margrethe Vestager is a “real champion” for pursuing the Apple-tax case, in which her office found that Ireland provided €13 billion of allegedly illegal tax aid to the iPhone maker. The Government and Apple deny this and are appealing the finding, made in August 2016.

Mr Stiglitz said that Ireland is a player in an evolving situation where countries are reducing their tax rates, joined most recently by the US in December, which cut its main corporate rate to 21 per cent from 35 per cent. He said that the mounting competition between countries internationally will not end until company tax rates around the world “end at zero”.

Mr Donohoe said that Ireland’s 12.5 per cent rate has been set in stone for many years and the State has “no intention” to cut it further. He said the Ireland is appealing the EU’s finding in the Apple case because Ireland “doesn’t do [tax] deals with individual companies”.

While Ireland changed laws in 2015 meaning Irish-registered companies could no longer be “stateless” for purposes when Apple’s tax affairs in the State came under the scrutiny of authorities on both sides of the Atlantic Ocean. Mr Donohoe highlighted to the panel that Ireland last year became one of the first European countries to introduce country-by-country reporting for multinationals to declare where they pay tax.

However, the Government is concerned about the EU’s plans to introduce a digital tax, with a Revenue Commissioners briefing document, released to the Irish Times this month under the Freedom of Information Act, warning that it would lead to a significant fall-off in corporation tax and payroll tax receipts and hit the State’s ability to attract inward investment.