‘Cinderella’ Trump will finally go to the Davos ball 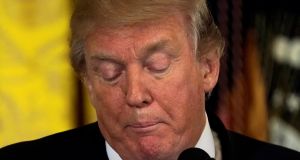 Donald Trump: Never invited to Davos when he was merely a businessman, he will arrive on Thursday as leader of the world’s last superpower, commanding attention if not admiration. Photograph: Yuri Gripas/Reuters

By any measure, he made a lot of money, the kid from Queens in New York; maybe not as much as he boasted, but a fortune. And yet the chip on his shoulder was at least as big as his bank account.

Never accepted, never respected, he remained on the outside pressing his nose against the window of the club of elites he both revered and resented. So when US president Donald Trump arrives in this snowy, mountaintop resort where financial titans mingle with heads of state in an annual Saturnalia of capitalism, it may feel like a moment of vindication.

Never invited when he was merely a businessman, Mr Trump will arrive on Thursday as leader of the world’s last superpower, commanding attention if not admiration. Whatever else, he cannot be ignored now.

“Part of him will feel the resentment that has long smouldered within and part will revel in the fact that he’s the president and no one else is,” said Michael D’Antonio, a Trump biographer. “Considering his tendency to say or tweet whatever comes to mind, we might expect both Trumps – the testy one and the triumphant one – to appear. We may even see and hear him toggle between the two, uncertain if he’s superior or inferior.”

Mr Trump’s decision to attend the World Economic Forum at Davos, something US presidents generally avoid lest they look out of touch hanging out with the jet-setting crowd, sets the stage for one of the most intriguing encounters of his year-old presidency.

Not only will he finally crash the party that would not have him, but he will also bring his protectionist “America First” message to the ground zero of globalisation, addressing the very people he has cast as the villains of his political narrative. The president foreshadowed the awkward and perhaps tense visit by slapping tariffs on imported solar panels and washing machines just before departing Washington.

“I’m going to Davos,” Trump said after signing the orders. “We’ll be talking about investing in the United States again, for people to come in and spend their money in the good old USA.”

Rather than touting the virtues of lowering economic barriers, Trump will promote the growing American economy and argue for foreign investment. “The president will continue to promote fair economic competition and will make it clear that there cannot be free and open trade if countries are not held accountable to the rules,” said Gary Cohn, his economics adviser.

“As the president has said repeatedly, America and his administration supports free and open trade, but it needs to be fair and reciprocal.” His message will stand out.

How Trump will calibrate his message is the preoccupation of the forum so far. Will he declare victory over the fat cats? Lecture them about trade? Or seek to win them over?

“He’s not going to get up to the stage of Davos and insult them,” predicted Anne-Marie Slaughter, the president of New America, a Washington-based research organisation, and a former director of policy planning at the State Department under president Barack Obama. “He’s so often a chameleon. He will adapt his message completely to the crowd. What he tweets, on the other hand, is likely to be very different.”

To be sure, many of the American 1 per centers here have Trump to thank for the substantial corporate and personal tax cuts that he helped push through Congress in December. But privately, they consider him a global wild card and bristle at his efforts to build walls, figuratively and literally, against immigration and free trade. Mr Trump, after all, is the president who has taken a wrecking ball to the liberal international order that Davos represents.

Davos participants rarely confront the grievances that globalisation has produced in a visceral way, and some analysts said Trump’s message might be a bracing reminder that the wheeling and dealing has real-world effects on people far below this mountain retreat.

“It’s important for the Davos elite to hear from the populist president who, although a billionaire businessman himself, is better able than they to understand what real people need in the United States and perhaps in other countries as well,” said Peter Van Praagh, the president of the Halifax International Security Forum, another annual gathering. – New York Times