Opinion: Businesses must prepare for lengthy period of restrictions and tightened border rules 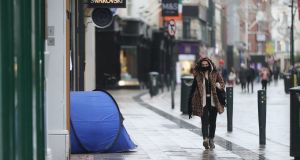 A woman walks past the tent of a homeless person on Grafton Street in Dublin during lockdown. Photograph: Niall Carson/PA Wire

Things can change quickly in economics and commerce, but even those worlds rotate in slow motion compared to Planet Pandemic. Time after time, it has shown its ability to spin at warp speed with dizzying consequences, such as the human carnage wrought in Ireland over recent weeks following what was merely a brief Christmas interlude between lockdowns. Coronavirus is a Grinch.

This virus turns on its own plane and does what it wants, master of its world and ours. That is simultaneously awesome and dispiriting; the former because as humans we covet raw power and the virus has it in spades, the latter because we recognise that its power has, so far, outgunned ours.

8 Covid-19: Mandatory hotel quarantine system could be running in a week

10 Ken Early: Klopp all at sea as Liverpool continue to flounder

16 Do young people really need to go back into the office?

18 ‘Do I have to do everything around here?’ Irish women and the ‘invisible job’

19 Nicola Coughlan: Women used to have to be sweet. Now we can be obnoxious eejits – thank God

23 Benefits of sport far outweigh the Covid risks so why are kids still not playing?

26 Colin Farrell: ‘After 20 years of drinking the way I drank, the sober world is pretty scary’

29 Up to 600 doctors may leave Irish health system in July, IMO warns

32 International Women’s Day: No more excuses on gender and power

39 Eirgrid proposals to include €2bn power line around Irish coast