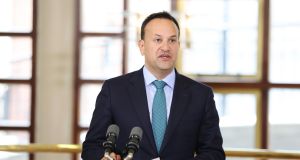 The State would likely see an increase in companies going out of business later this year, continuing into next year, Mr Varadkar said. Photograph: Julien Behal

Banks will need to show borrowers and businesses hit by the coronavirus pandemic further leeway, the Tánaiste and Minister for Enterprise, Trade and Employment Leo Varadkar has said.

A payment break for mortgages and business loans for those financially affected by the virus is due to expire at the end of September.

Mr Varadkar said on Wednesday that the Government would continue to discuss further forbearance for loans with the country’s main banks.

“I think we may need more forbearance from banks when it comes to business loans, when it comes to mortgages, because this has gone on for longer than we may have anticipated back in March,” he said.

“None of us want to see people losing their homes and losing their businesses if there is a realistic prospect of them holding onto them,” the Fine Gael leader said. The previous extension to the payment break agreement with banks was “starting to run out”, Mr Varadkar said.

The State would likely see an increase in companies going out of business later this year, continuing into next year, he said.

“In terms of the number of insolvencies coming through we’re not seeing that yet, but we wouldn’t expect to see it yet, and that may well happen in the months to come. Companies and firms that are hanging on realising things aren’t going to work out for them, and going into insolvency later in the year and next year,” he said.

The Government’s focus would be to “protect as many firms as possible”, but primarily companies struggling as a result of the virus, “as opposed to those that were unviable even before the pandemic”, he said.

Mr Varadkar was speaking at a remote conference of Ireland’s ambassadors and diplomats organised by the Department of Foreign Affairs on Wednesday.

Under their projections Europe would not return to pre-coronavirus levels of economic activity until late 2022, he said.

Alan Barrett, director of the Economic and Social Research Institute, said there was a “horrible reality” that financial supports for businesses could not go on forever.

“The worry is if the vaccine, or the rollout of the vaccine, is sufficiently delayed and the current crisis is extended over a longer period of time, the longer this happens, the more those companies are going to be under stress.

“And at a certain point governments have to start making hard decisions about whether these things can be extended indefinitely,” Mr Barrett said.

On Tuesday all members of the Cabinet had to restrict their movements while Minister for Health Stephen Donnelly awaited a coronavirus test after feeling unwell, which came back negative that evening.

Commenting on the “drama”, Mr Varadkar said the decision for all Ministers to restrict their movements had been taken out of an “abundance of caution” and had been a “bit of a false alarm”.

“We have had cases before of people requiring tests, staff and Ministers, and didn’t have to restrict our movements,” he said.

The Tánaiste said it was difficult to compare current large levels of Government borrowing to decisions taken during the last financial crash.

“This money isn’t going into bailing out banks, it’s going into health, education, saving businesses. At a moral level I think it’s a very different form of spending than what was done in the financial crisis,” he said.