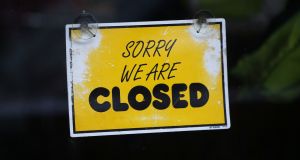 It has been a difficult and distressing week for many Irish businesses forced to close their doors again as the Government implemented Level 5 restrictions to cope with a second wave of Covid-19. The latest sentiment index from KBC Bank Ireland shows that consumers are feeling miserable too, with the mood of the public plunging in October amid fears for jobs, incomes and the future.

The survey was carried out before the Level 5 announcement was made, suggesting that bigger drops in confidence may be to come. Eoin Burke-Kennedy reports.

In his weekly Caveat column, Mark Paul writes that the most galling part of the decision to proceed with a second lockdown is that, in the circumstances that persist, it may be the wisest thing to do – but that is not the same thing as accepting that rolling lockdowns are correct as an ongoing strategy.

A large part of the economy does continue to function. In our Agenda feature, Barry O’Halloran talks to Glanbia, Kerry, Combilift and pharma group MSD about how their work continues during the pandemic.

The Government is effectively profiting from the maintenance of public health by charging businesses VAT on the purchase of personal protection equipment (PPE), according to Isme, which says the cost of cleaning materials and PPE will “remain a substantial drag on businesses for some time to come”. Eoin Burke-Kennedy reports.

In our World of Work feature, Olive Keogh looks at how organisations can better deal with their employees’ potentially debilitating “Covid grief” – where they are mourning the loss of postponed weddings, missed graduations, painful separations, furloughed colleagues and shuttered offices.

It was announced in September that reform of local property tax (LPT) would be deferred until next year. But as recently as June, Minister for Finance Paschal Donohoe told officials that it was “untenable” to allow so many houses, including those built since 2013, to continue avoiding eligibility for the tax. Ken Foxe reports.

To Europe, where the meat industry is seeking a European Union-wide ban on the use of terms like “vegan burger” and “veggie sausage” in votes that are expected to take place on Friday, with the farming lobby suggesting alternatives such as veggie “disc” and “tube”. Naomi O’Leary reports.

Finally, anyone who fancies a pint of the black stuff to wash down their veggie discs and tubes might – or might not – be tempted by Diageo’s new non-alcoholic version. It looks and tastes just the same, swears Diageo. Charlie Taylor hasn’t tried it himself yet, but he reports on the innovation that is Guinness 0.0.