Wild Geese: the Tipperary man drawing the map of Sydney 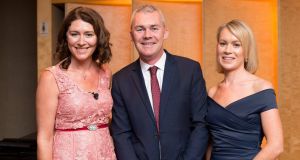 Oliver Morrissey developed underground mapping app Utillix after years working in construction and is now developing his buisness from Syndey.

After leaving school before his Leaving Cert to start work in the construction industry, Morrissey has now developed an app that has been described as the Google Maps of underground utilities.

Morrissey, who grew up in Golden, Co Tipperary, spent between 1992 and 2001 working his way up from machinery operator to supervisor as he worked in the US and Australia. He had just sold his property in Boston when 9/11 took place.

“I was 26 at the time and I was actually in the air flying between San Franciso and Boston that same weekend.”

When he moved home, he met his wife Catherine and by the time they married in 2008 and had baby Eabha, he was working for BAM Civil. When a management restructure took place, they decided it was time for the family to make a change.

“We could see everything was going downhill. We decided instead of having enough money just to survive, we’ll take our redundancies and make a new life for ourselves in Australia.”

After leaving snowy Ireland in 2011, the Morrisseys touched down to 38 degree weather in Sydney. Catherine, a primary school teacher, secured a position in a private school while Oliver went to work for his brother, who had his own well-established company Athassel Excavations.

“I worked away for a few years up until 2013 when I got the idea for Utillix,” said Morrissey. He describes Utillix, an underground mapping app, as a vision of what is underneath your feet in the construction industry.

“When you’re planning construction, you might get seven or 10 different drawings for all the networks you’re going to come across, and then you have to shuffle through all of them and figure out where each one is. What we do is overlay the entire lot on Google Maps and colour code everything so you can put your finger on your phone or iPad and it will give you the information,” he said.

“How we do that is we contact the local service provider, for example the water, gas or telecoms company, and we’ll put it all together in an easy to understand view.”

Utillix, which has five directors including Oliver and Catherine, operates project by project from an office in Bondi Junction. Companies and homeowners will have their drawings for their property and the option to have a public or private view. Eventually, Morrissey said they will have a complete map of Sydney.

The app is free to download from iTunes, Windows and Android and is also available via a web portal. Utillix has received help from Google and is now backed by IBM.

Utillix also has projects in Perth, Brisbane and Melbourne. Utillix Inc has also been established in the US, with three companies in Massachusetts. Utillix Ireland is based in Thurles under managing director John Hanafin.

“We’re setting up in Singapore and we’re talking to utility providers at the moment. Tiong Sing is one of our contractors that’s using our product, they’re one of the biggest contractors in Singapore,” said Morrissey.

Oliver Morrissey said he can’t stress enough how much of a help the Irish Australian Chamber of Commerce has been.

“They’ve got a great mentoring programme and they’ve put me in touch with an Irish construction leader over here. The business culture is great because everyone helps each other. They’ve really got behind us because they see there’s something global that can come from our product,” said Morrissey.

Morrissey is also in contact with utility providers in Ireland. “We’ve been talking to Dublin City Council and the utility providers and there is a major appetite for what we’re doing. The UK is another market as well where there’s been interest so we’re dealing with that at the moment.”

The Morrisseys will soon be back in Ireland for six weeks as part of a trade delegation coming to Dublin with the Irish Australian Chamber of Commerce. Oliver Morrissey said the only thing he has to contend with when moving between countries is the accent.

The new land of opportunity

Australia is the new land of opportunity and there’s no reason for anyone not to have a job, according to Morrissey.

“I looked at the local paper just this afternoon to see the job opportunities out here and there are so many, in hospitality, construction, secretarial, business.”

His advice for anyone looking to make the move to Australia would be to get up early and do your job, and not to stay out all night drinking. For Oliver and Catherine Morrissey, Australia is the place where they built their business and will bring up their two children.

“We’re firmly settled in over here and Ireland is probably our second home but this is our base.