UK developer gets green light for 245 new homes in Lucan

Construction on the development will begin later this year 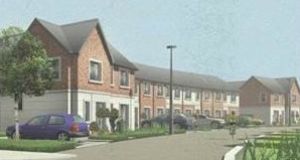 A computer generated image of the Tandy’s Lane development in Lucan.

Construction will begin later this year on a a site that has been granted planning permission for 245 new homes in Lucan, Co Dublin.

UK developer Quintain, which is owned by Lone Star Funds, the US private equity group that invests in distressed assets, received permission for the 8 hectare (20 acre) site. It has a gross development value of about €82 million.

Quintain – best known for the development around London’s Wembley stadium – said the first homes on the site will come to market in the middle of next year. In total, 213 homes, 16 duplexes and 15 apartments will be built.

The “Tandy’s Lane” development is near Lucan town centre and close to transport links such as the Adamstown rail station, the M4 and the N4.

In total, Quintain is developing 89 hectares (220 acres) in the Adamstown and Lucan areas, where it plans to build more than 4,000 new homes and 600,000sq ft of commercial space.

Lone Star set up a Dublin-based unit of its UK property development business Quintain late last year after abandoning a plan to roll its massive Irish residential landbank into a publicly-quoted company.

“These homes will be completed to the high building standards and leading environmental specifications that Quintain guarantees to its buyers. They represent the latest stage in Quintain’s plans to deliver 9,000 homes across four sites in the greater Dublin area.”

The developer has also reached “agreement in principle” with the Department of Education for the delivery of a new primary school at the development. They expect to open the school in 2023.

In March, Quintain received permission to build 153 homes in Portmarnock in north Co Dublin, while last year it acquired the 29.5 hectare (73 acre) project eden residential site at Cherrywood in south Dublin for €127 million.