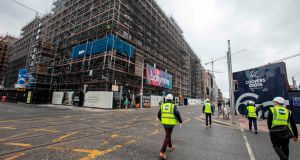 Construction workers make their way to a site along the quays in Dublin. Photograph: Paul Faith/AFP via Getty

The Covid-19 lockdown will leave home building far short of the 28,000 originally predicted for this year, according to Ballymore Properties chief executive Sean Mulryan.

Ballymore, one of the Republic’s biggest developers, restarted work on Monday after a two-month shutdown on sites including the Dublin Landings office and apartment complex in the capital.

Mr Mulryan warned that the number of new homes built in the Republic this year would not reach the 28,000 predicted in some quarters before the pandemic struck.

He suggested that the final number would be closer to 15,000, but added that it was hard to assess at this point.

“I think completions will be down. Our residential delivery here will definitely be delayed by six months,” he said.

Ballymore is building 298 apartments at Dublin Landings, which it is selling to institutional landlord Greystar for a reported €175 million.

The group has built and handed over offices with space for 5,500 workers to tenants including Irish institutional property investor Iput, and software multinational Microsoft.

Mr Mulryan agreed that the pandemic-driven shift to remote working, which prompted companies such as tech giant Twitter to say staff could work from home for ever, could hit demand for offices.

“It will have an impact, but I don’t think it will be as much as some people are saying,” he said. “All of our employees that I speak to cannot wait to get back to the office, at the end of the day, some people will work from home, but others like that contact with people that you get in the office.”

Mr Mulryan added that business travel could suffer. He intends cutting his journeys by 50 per cent once flights resume and believes others will take similar steps.

As well as the shutdown, precautions such as social distancing mean there has been a reduction in the number of workers on building sites at any one time, slowing the rate at which construction is completed.

Paul Carty, Ballymore’s director of construction, explained there were fewer than 200 workers there on Monday, against what would have been a normal complement of about 350-400.

He said the group should increase the number of workers from 50 per cent to 60 or 70 per cent over the coming months.

Ballymore has strict protocols in place. There is one entry and one exit. “We have a one-way system,” Mr Carty noted. Workers’ temperatures are taken at entry, and each worker has an identity card that provides contact tracing throughout the day.

Where staff work in close proximity, they wear full personal protection equipment, including visors. Where they are further apart, they still wear masks, gloves and other protective gear.

Mr Carty explained that there were three basic categories used to regulate the use of protective equipment, those working 2m or more apart, those operating 1m-2m apart, and those functioning closer together.

Canteen sittings are staggered and the facilities cleaned immediately after each one. Ballymore applies similarly strict hygiene to workers’ changing rooms, which have individual cubicles, and toilets. “There is also a huge amount of hand-washing here,” Mr Carty said.

The rules apply to both Ballymore’s own staff and those employed by the 40 or so subcontractors working on the Dublin Landings site.

Mr Carty was unable to say what the final cost to the company of the personal protective equipment and other precautions taken there would be, but estimated it at “several hundred thousand euro”.