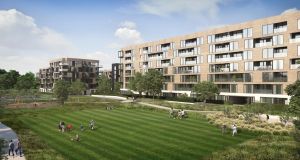 A residents’ association in Clontarf is out of time to challenge a ministerial failure to designate former playing fields at St Paul’s school in Raheny, where a developer wants to build 657 apartments, a special protection area for wild birds, a High Court judge has ruled.

Such a designation would render the building of housing on the site “highly unlikely, if not impossible”, Mr Justice Michael Twomey observed on Thursday when striking out the challenge by Clonres CLG.

In other proceedings last month, An Bord Pleanála consented to orders quashing its February 2020 permission granted to Crekav Trading GP Ltd, part of developer Pat Crean’s Marlet Group, for a development of 657 apartments on the land, purchased by Crekav in 2015.

A fresh decision by the board on the planning application is pending. The consent orders were made in two separate cases, the first by John Conway and the Louth Environment Group, and the second by Clonres.

The orders were made on the basis the planning body had not adequately addressed requirements of the habitats directive when assessing the impact of the development on feeding grounds of protected bird species in Dublin Bay.

The planning application was remitted to An Bord Pleanála for determination “in accordance with law” from the time it received a report in December 2019 from the chief executive of Dublin City Council, which recommended permission be refused on grounds including the failure of the developer’s Natura Impact Statement to demonstrate that the development would not affect populations of protected Brent goose, the black-tailed godwit or curlew in Dublin Bay.

The report also said the development would be contrary to the proper planning and sustainable development of the area. Mr Justice Twomey’s judgment on Thursday concerned a separate claim by Clonres against the minister for heritage over the failure to designate the playing fields as a special protection area.

The judge rejected the Clonres argument that its case, which issued in April 2019, is not subject to the time limits applicable to judicial review proceedings. Despite the claim by Clonres that it is not challenging any public law measure, it is effectively seeking to challenge the administrative decision by the minister in 2009-2010 not to designate the St Paul’s site as a special protection area, he said.

Such a challenge should have been brought within three months of that latter decision, he held.

Even if a letter of August 24th, 2018, from the chief state solicitor’s office, on behalf of the minister, refusing a demand by Clonres dated August 7th, 2018, for the site to be designated a special protection area was the ministerial decision being challenged, the Clonres challenge was still five months outside the time limit for such a challenge, he said.

He rejected arguments of a continuing obligation on the minister to designate sites with the effect time limits do not apply. Clonres had also not shown “good and sufficient” reason for the court to extend time to pursue the case, he held.

Clonres had effectively claimed that a good and sufficient reason for bringing judicial review proceedings almost a decade late is that the judicial review concerns European environmental law, he said. If that was correct, there would never be any legal certainty concerning administrative decisions by public bodies that related to environmental law issues, and third parties such as Crekav would always be susceptible to having their plans to create housing, and considerable employment in the building of those homes, “set at nought at any time”.

Final orders in the case will be made on a later date.