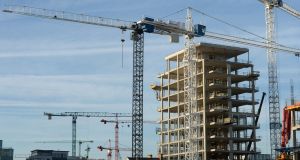 The High Court has overturned a fresh grant of permission by An Bord Pleanála for increased height of two blocks of apartments in a development of 500 apartments/co-living spaces in the north Dublin docklands. Photograph: Dara Mac Donaill

The High Court has overturned a fresh grant of permission by An Bord Pleanála for increased height of two blocks of apartments in a development of 500 apartments/co-living spaces in the north Dublin docklands.

Last May, in proceedings by Dublin City Council against the board, the court overturned, on consent, an earlier permission granted by the board for the height increases.

The case arose from a plan by a company of developer Johnny Ronan, Spencer Place Development Company (SPDC), for more than 500 apartments/co-living spaces and commercial units in the North Lotts/Grand Canal strategic development zone of the north Dublin docklands.

In its proceedings, the council opposed the board’s permission for height increases from seven to 13 storeys for one block and from seven to 11 for the second.

In that May ruling, the High Court made consent orders quashing a December 2919 permission by Bord Pleanála for the height increases and remitted the matter for fresh consideration by it, to be carried out within six weeks of perfection of the orders.

After a four-day hearing last week, Mr Justice Richard Humphreys ruled last Friday he was quashing the board’s permission and would deliver a written judgment at a later stage. The judge added he was not remitting the matter to the board for another reconsideration.

In separate proceedings, Spencer Dock Development last year lost a challenge to the council’s legal interpretation of 2018 Urban Development and Building Heights guidelines issued by the Minister for Housing Planning and Local Government.

The company had argued it should be allowed a building height of between seven and 13 storeys in accordance with general building height guidelines. The council argued the strategic development zone planning scheme for the lands only permitted heights of up to 10 storeys.

It was also argued that strategic development zone rules can only be amended through a process that includes a fresh round of public consultation.

After the council refused permission, the company appealed to An Bord Pleanála which overruled its own inspector’s recommendation and gave the go ahead for the height increases. The council then initiated proceedings challenging the board’s decision.