Ccompany already owned a 50% interest in road, which is part of the ‘Atlantic Motorway’ 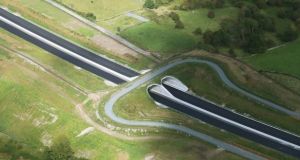 London-listed HICL Infrastructure is to acquire the remaining 50 per cent interest in the M17/M18 Gort to Tuam motorway that it doesn’t already own in a €41 million deal.

The road, which forms part of the “Atlantic Motorway” route, is a 57km stretch of road linking the Galway towns. It replaced a section of the N17, the road made famous by the band The Saw Doctors.

The infrastructure investment company, which is managed by InfraRed Capital Partners, is acquiring the stake from the Marguerite I Fund in a transaction that is expected to be completed by the end of September.

HICL acquired an initial 10 per cent stake in the 28-year concession at the end of 2014. It subsequently took an additional 40 per cent interest in the project last year in a €23 million deal.

“We are delighted that HICL is taking full ownership of the M17/M18 road public-private partnership (PPP), a project that has improved connectivity between airports in the west of Ireland. The acquisition exemplifies HICL’s strategy of increasing its stakes in known, high-quality core infrastructure assets that deliver essential services and long-term returns,” said Harry Seekings, co-head of infrastructure at InfraRed.

“The investment is expected to be accretive to portfolio yield and will provide further geographical diversification to HICL’s exposure to availability-based transportation projects,” he added.

Construction of the toll-free 53km motorway and 4km Tuam Bypass dual carriageway commenced in January 2015 and was completed in September 2017 at a cost of €550 million.

The road is among the most expensive public private partnership (PPP) projects undertaken by the State. According to data published by the Department of Public Enterprise and Reform, it will cost the State €959 million by the time it is handed back from its private operators in 2042.

The upfront design and construction costs of the scheme were financed by the PPP who, in turn, are remunerated by payments over the 25-year operational period contract term. HICL also receives payments for maintenance of the motorway.

HICL’s other Irish investments include a 75 per cent stake in a deal to construct, operate and maintain the Cork School of Music. It also has a 60 per cent stake in the Ireland Primary Care Project for 14 primary care centres, and a 50 per cent interest in the Irish Group Schools scheme for five secondary schools.

Share in the company were down 0.7 per cent in midday trading in London on Tuesday.