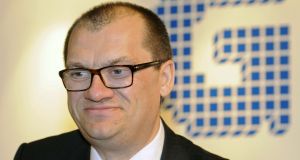 Revenue at Grafton Group rose in 2019, with the Irish merchanting business putting in a strong trading performance as the year ended. But Brexit continued to cast a shadow over the business as householders in the UK remained cautious on their spending, hitting the company’s merchanting business there.

In a trading update, the company said overall trading in November and December was better than anticipated, and while end markets were “subdued”, operating profit for the full year was expected to be about £202 million.

Revenue from continuing operations rose by 2.7 per cent, reaching £2.67 billion, while growth at constant currency was 2.9 per cent. Average daily like-for-like revenue rose by 1.9 per cent for the year.

In Ireland, its merchanting business saw a rise of 5.4 per cent in revenue for the year, and growth of 6.2 per cent on a constant currency basis. “The Woodie’s DIY, Home and Garden business in Ireland delivered a strong trading performance in the key fourth quarter and for the full year overall,” Grafton said in a statement.

The Netherlands also recorded growth, with revenue up 36.2 per cent, with average daily like for like revenue up 0.6 per cent. There was some softness in the fourth quarter, offset by positive gross margin trends.

However, the UK saw a 1.1 per cent decline, and a 0.6 per cent increase in average daily like for like revenue. The company attributed this to continued caution in households on discretionary spending as uncertainty persisted during the fourth quarter, weighing on demand.

Overall, Grafton’s retailing business saw a 3.7 per cent increase in revenue, while the manufacturing division saw revenue increase by 0.7 per cent over the year. Chief executive Gavin Slark said 2019 was “a year of significant strategic progress with the acquisition of Polvo in July which increased our scale and consolidated our market leading position in the Netherlands. We also reshaped our portfolio of businesses with the successful disposal of Plumbase and the Belgian merchanting business in October”.

“While we remain cautious about the timing of any recovery in the UK merchanting market at this very early stage in the new year, our expectations for 2020 are positive for the overall group and we are optimistic about growth opportunities. We are well placed to continue to successfully implement our development strategy supported by very cash generative businesses and a strong balance sheet.”