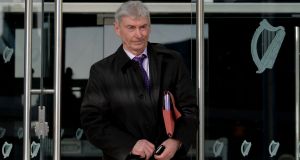 Seán Reilly’s firm, McGarrell Reilly Homes, has a substantial site in the Pace/Dunboyne area in Co Meath that the council had earmarked for zoning. It hopes to build there. Photograph: David Sleator

The State’s job-creation fund and developer Seán Reilly are likely to benefit following a Government decision to drop opposition to a zoning proposal for 500 houses and commercial development.

Minister for Housing Simon Coveney recently withdrew a direction to Meath County Council to reverse a decision to zone land at Pace, near Dunboyne, for 500 new homes, shops and business, effectively opening the area for development.

Mr O’Reilly’s McGarrell Reilly Homes has a substantial site in the area that the council had earmarked for zoning and hopes to build there. His company’s financial backer is Activate Capital, a €500 million housebuilding venture whose investors are the Ireland Strategic Investment Fund (ISIF) and US firm KKR.

The ISIF is a State body that is taking the €7.2 billion left from the National Pension Fund, most of which was spent in the 2010 bailout, and investing it in projects that will have deliver a “double bottom line” – a return on the money itself and job creation.

Activate agreed to fund McGarrell Reilly earlier this year in a deal that involved the property company regaining control of more than 300 acres of land spread across sites in Cork, Dublin, Kildare, Kilkenny and Meath.

The ISIF holds two-thirds of Activate, while KKR, a private equity fund, has the balance.

McGarrell Reilly’s land at Pace is part of its agreement with Activate. Meath County Council zoned the area for housing and commercial development as it is close to a key junction on the M3 Dublin-Kells Motorway.

It is also flanked by two railway stations, including the M3 Parkway, which is a short journey from Dublin and connects directly with the International Financial Services Centre.

Local sources point out that it has ready-made infrastructure. “Most developers build and hope that the infrastructure comes, but this has it in place. It would be crazy not to build there,” one person said on Friday.

The dispute between the Government and Meath County Council stretches back to early this year, when the then minister for the environment, Alan Kelly, warned the local authority not to zone the land in Pace.

In June, Mr Coveney then used his power under planning law to issue a draft direction ordering the council to remove the zoning from the county development plan.

Ministers cannot interfere in individual applications for planning permission, but they do have statutory powers to govern zoning.

Meath county manager Jackie Maguire wrote to the Minister defending the decision on a number of grounds, including Meath’s housing and economic needs, and pointing out that the zoning was based on proposals for the Pace area’s sustainable development.

Mr Coveney responded that he was not going to implement the direction in light of the “lack of new housing supply coming forward in the Dunboyne area” and the need to attract multinational investors. His decision took the area’s road and rail links into account.

No company has yet sought planning permission to build in the Pace area. Any applications will have to comply with the zoning and the county development plan’s terms in order to succeed.

McGarrell Reilly is active in a number of areas in Meath, including Ratoath and Newtownmoyaghy, close to Kilcock on the Kildare border.

The company is involved in residential and commercial building. It recently launched the latest phase of its City North business park just off the M1 Dublin-Belfast motorway.

Mr Reilly established the company in the 1980s. He was one of the so-called Maple 10 group of developers to whom Anglo Irish Bank loaned money to buy its shares as the financial crisis deepened in 2008.