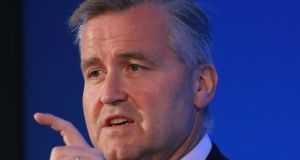 Glass Lewis, which advises investors on how to vote at annual general meetings, has said in a report that it remains “particularly concerned” about Mr Manifold’s €677,000 pension benefit for last year, equating to a high rate of 44 per cent of basic salary, even though he has offered to reduce the ratio to below 25 per cent by early 2022. It also raised issues with executive pension plans.

CRH has been the subject of several contentious pay-related votes in recent years. However, both proxy advisory firms have decided to back the remuneration resolution at the upcoming agm on April 23rd. Shareholders are being encouraged not to attend but to vote by proxy and to place questions in advance.

CRH is understood to be reviewing its plans to pay a final €494 million dividend to shareholders and to extend a share buyback programme, as it monitors the impact of Covid-19 on its business. The group has spent €1.9 billion in the past two years repurchasing its own stock.

Morgan Stanley estimates that CRH’s free cash flow could fall about 40 per cent over 2020 and 2021 under a stress scenario, albeit faring slightly better than the wider European building materials sector. The group’s operating cash flow amounted to €3.5 billion last year, or 83 per cent of earnings before interest, tax, depreciation and amortisation (Ebitda).

CRH declined to comment when asked about the extent to which its plants have been affected by efforts by authorities globally to contain the spread of coronavirus.

“They are subject to government restrictions in a lot of regions same as everyone else – most construction activity has stopped as a result in France, Italy, Spain, Benelux, the UK and Ireland,” said Robert Gardiner, an analyst with Davy, adding that the extent to which construction had stopped in the US varied by state.

Still, Mr Gardiner highlighted in a note to clients last week that CRH had “significant financial headroom”, with almost €3.8 billion of cash to hand and €6.8 billion of undrawn credit facilities.

“This financial capacity – built and reinforced over a long number of years – leaves the group well placed to ride out any short-term impact on its business,” he said.

Shares in CRH are down almost a third so far this year at about €24.14, having rallied by 48 per cent off their lows in the past two weeks.

Swedish activist investor Cevian, which first emerged on the company’s shareholder register early last year, has used share price weakness to increase its stake to 3.5 per cent in recent weeks.

US president Donald Trump tweeted his support this week for a $2 trillion infrastructure investment package as a measure that could reboot the world’s largest economy following the Covid-19 emergency.

While CRH would be a key beneficiary from such measures, as the biggest road builder in the US, Mr Trump’s efforts to promote a new infrastructure package since he came to power three years ago have so far failed to deliver.