Move from construction companies comes after ramped up coronavirus restrictions 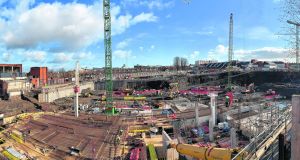 BAM Ireland has stopped construction on the National Children’s Hospital in Dublin.

Builders have halted work on major road and other projects after the Government stepped up Covid-19 restrictions at the weekend.

Taoiseach Leo Varadkar added construction to the list of industries that had to stop or limit activities when he announced extra steps to halt the spread of coronavirus.

Work has stopped on road developments, including the €280 million Macroom-to-Ballyvourney route in Co Cork, where Jons Civil Engineering is the main contractor, and the €110 million upgrade to the M7 in Co Kildare, for which Siac and French group Colas are jointly responsible.

Transport Infrastructure Ireland (TII) confirmed that any road building not regarded as essential has stopped. However, maintenance work is continuing as it is deemed critical.

One of the Republic’s biggest contractors, Sisk, has halted work on projects such as the €220 million Technological University campus in Grangegorman, Dublin.

Sisk has closed all sites except motorway maintenance work. Its other contracts include upgrading Pearse station in Dublin, residential building in Cherrywood, also in the capital and a large complex of offices, shops and apartments at Bonham Quay in Galway.

Rival BAM Ireland has stopped construction at Horgan’s Quay in Cork, where it is building offices, homes, a hotel and shops in a joint venture with Clarendon Properties.

The company has also halted work on the National Children’s Hospital in Dublin and on a new microchip factory at tech giant Intel’s complex in Leixlip, Co Kildare.

Work at the Intel site ceased on Monday, according to a statement from Dutch-owned BAM.

BAM said on Tuesday that the National Paediatric Hospital Development Board had confirmed that the children’s hospital was not essential construction. The company ceased work on the site once the client clarified this, BAM added.

Expansion at the National Rehabilitation Hospital, which is nearly complete, will be finished, it is understood.

Earlier this week, listed house builders Cairn Homes and Glenveagh Properties confirmed that they had halted work. Between them, the two are building on more than 30 sites in total.

Meanwhile, TII said that work on plans for the MetroLink, the railway line that will connect Dublin Airport with the city, is continuing. No building is under way on that development as it is in the early planning stages.

Unions such as Unite argued that construction should have been included in Covid-19 restrictions announced earlier last week as it was impossible to maintain social distancing on building sites.

Siptu and the Irish Congress of Trade Unions favoured allowing construction to continue but warned that employers had to enforce measures to protect workers.

1 Michael Smurfit: ‘I asked Trump to invite me to the White House for my 80th birthday’
2 ‘I’m so lucky to be in the Caribbean – a million miles from Derry Girls’
3 Small businesses are cannon fodder in zealous anti-virus experiment
4 Household savings soar as consumers stop spending
5 Irish business of Carluccio’s restaurants to be wound up
6 Tax and the Pandemic Unemployment Payment: Your questions answered
7 ‘The recovery needs to be a full-scale economic renewal’
8 Donohoe tweaks wage subsidy scheme so mothers returning from maternity qualify
9 Ireland stands to benefit in a big way from investing in public transport
10 ‘Never mind GDP; the most fundamental job of any leader is to keep his people alive’
Real news has value SUBSCRIBE