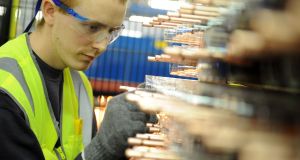 The UK’s Competition and Markets Authority, which regulates mergers and acquisitions, said that it intended investigating the Kingspan transaction.

The Cavan-based insulation and building materials manufacturer is buying British business Building Solutions Ltd for €42 million following an agreement struck in the autumn.

Yesterday the UK’s Competition and Markets Authority, which regulates mergers and acquisitions, said that it intended investigating the transaction to ensure that it does not damage competition. Most substantial deals face such investigations in both the UK and Republic.

The British authority investigates mergers where the UK turnover of the acquired business exceeds £70 million (€82.5 million) , or the two enterprises provide at least 25 per cent of the same goods and services supplied in that jurisdiction, and the deal increases that share.

The CMA has invited comments from any interested party up to a closing date of February 20th. After which it will begin a phase one investigation. If officials believe it necessary, the authority can carry out a more detailed phase two probe.