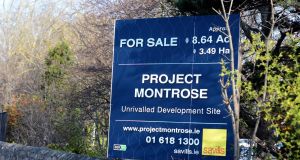 Cairn Homes purchased the RTÉ site for €107.5 million over two years ago.

Cairn Homes has lodged planning documentation with An Bord Pleanála signalling its intention to build 611 apartments and three townhouses on the site it purchased from RTÉ in Donnybrook for €107.5 million over two years ago.

The number of apartments planned is 111 more than the original 500 Cairn initially indicated it would construct on the 8.64 acre (3.49 hectare) site.

The site was sold at 43 per cent above the guide price of €75 million.

In a notice published by An Bord Pleanála, the Cairn plans for the site is described as comprising “611 apartments, three town houses, two cafes, one childcare facility, demolition of one existing sports and social club, change of use of Mount Errol from existing office use to private residents member’s club and gym and associated site works”.

Before the 2017 deal, Cairn Homes chief executive Michael Stanley stated: “If an opportunity like the RTÉ site comes along, it’s a once-in-a-lifetime chance to acquire a site of that quality.”

It is then open to Cairn Homes to take into account of the views expressed by An Bord Pleanála before lodging an application direct to An Bord Pleanála under Government fast-track planning rules.

Speaking in March, Mr Stanley said that Cairn Homes hopes to commence construction on the former RTÉ site in 2020.

Last November, the appeals board initiated pre-planning consultation for Cairn’s then plan for 619 apartments and three townhouses at the RTÉ site but Cairn Homes withdrew the proposal on December 20th last.

Last year, Cairn Homes’s revenues increased by 125 per cent to €337 million as its pre-tax profits increased six fold from €6 million to €37.6 million.

7 Davy board to search for other potential cases of wrongdoing