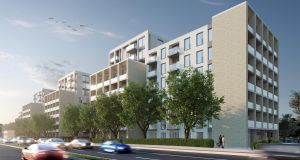 An artist’s impression of what Cairn’s development at the RTÉ site in Donnybrook will look like.

House builder Cairn Homes plans to build more than 600 apartments on land it bought in Dublin from broadcaster RTÉ for €103 million.

Cairn had been in pre-planning talks with An Bord Pleanála and locals about proposals for the site at Montrose in the capital’s upmarket Donnybrook suburb.

The company confirmed on Wednesday that it had formally sought permission to build 611 apartments, three town houses, a creche, cafes and other amenities there.

Cairn has applied for permission to build the homes under the fast-track strategic planning scheme for large housing projects.

This allows developers seeking to build more 100 dwellings to sidestep local councils and seek permission directly from An Bord Pleanála.

The scheme requires applicants to first hold formal pre-planning talks with local councils and An Bord Pleanála before submitting plans based on the outcome of those discussions.

Cairn confirmed that the application followed a “thorough pre-planning process” during which it worked closely with the local authority, nearby residents and An Bord Pleanála.

The board has up to 16 weeks to decide on whether or not to grant planning permission.

Its decision cannot be appealed but any interested party can ask a High Court judge to review it.

Michael Stanley, Cairn chief executive and co-founder, noted that the Covid-19 crisis had influenced its design.

“We have also taken into account e-working requirements when designing these homes,” he said.

The Dublin-listed company bought the land from RTÉ in a high-profile deal in June 2017, paying about 40 per cent more than the original guide price of €75 million.

The sale resulted from a shake-up of the State broadcaster as it sought to tackle challenges posed to its businesses by digital media.

Cairn originally signalled it would build about 500 apartments on the site.

Planners frequently ask developers to increase the number of homes they intend building on a particular site.

If international visitors are pariahs should we not be testing them on arrival?

1 If international visitors are pariahs should we not be testing them on arrival?
2 Belgium helps Ireland to a Brexit boon
3 ‘My rent here is so low it’s a joke’
4 WeWork on track for profits and positive cash flow in 2021, says chairman
5 Can Grafton Street stop the flood of closures?
6 Varadkar to meet banks in row over interest on mortgage payment breaks
7 How to turn racists’ genetic arguments against them
8 This charming man: how Paschal Donohoe won the Eurogroup presidency
9 Irish tech firm to facilitate cashless tickets for hurling and football
10 Where is Ireland’s contact tracing app?
Real news has value SUBSCRIBE