Building company failed on back of coronavirus crisis, court hears 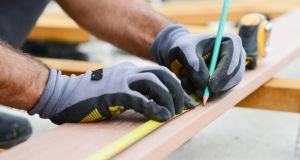 Counsel said there was urgency to the application as the company was concerned about the dissipation of assets. Photograph: iStock

The Covid-19 pandemic has claimed a corporate casualty with the loss of more than 30 jobs at a construction and plant-hire business, the High Court has heard.

The ongoing crisis had dissuaded an investor from putting in funds necessary to save the company, the court was told.

Ms Justice Teresa Pilkington appointed chartered accountant Anthony Fitzpatrick as provisional liquidator to Brandon Plant Hire Ltd, based on Trim, Co Meath, after being told on Thursday the company is insolvent to the tune of €934,000.

The company, currently involved in three projects, is engaged in the provision of substructures and groundworks on building sites as well as plant hire.

Its members petitioned for the provisional liquidator’s appointment to secure its assets and to ensure proceeds of those are properly distributed to the firm’s creditors.

Ronnie Hudson, instructed by solicitor John Kieran, for the company, said it had been profitable for many years since its founding in 1997 and was involved in several major house building projects.

Counsel said the company had been experiencing cash flow difficulties including issues concerning payments from Cairn Homes, for whom it has acted as a subcontractor on various projects.

The company had looked to an investor to help it continue to trade but, because of Covid-19, the investor was no longer interested in putting in money, rendering it insolvent and unable to trade.

Other factors which contributed to the company’s difficulties included the cost of hiring additional workers on projects and the bad weather in late 2019 and early 2020.

Counsel said the company’s employees are all on Covid-19 protection notice.

There was urgency to this application as the company was concerned about the dissipation of assets, he said. Creditors have been calling to its sites and telephoning its premises.

The directors had been put under “intense pressure” and had been threatened by creditors concerning works at a site in Dundalk, Co Louth.

Some of these creditors had threatened to damage some of the works in progress, counsel said. Should that occur, the prospects of creditors recovering monies owed would be further depleted.

The company’s assets include tools, piping, JCB diggers and dumpers and excavation equipment.

The appointment of a provisional liquidator would ensure assets would be secured and one creditor will not be able to obtain an advantage over another, counsel said.

Ms Justice Pilkington, noting the Covid-19 pandemic had certainly exasperated the company’s problems, said she was satisfied to appoint Mr Fitzpatrick as provisional liquidator and adjourned the matter to next month.