Builder to construct 611 apartments on broadcaster’s campus in Donnybrook 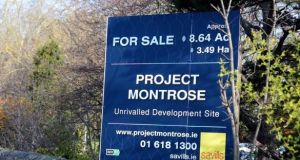 An Bord Pleanála has cleared the way for Cairn Homes to lodge plans to build 611 apartments in Donnybrook. It purchased the site from RTÉ for €107.5 million over two years ago.

The appeals board made the ruling after spending nine weeks examining Cairn’s application.

Cairn Homes can now make its formal planning application to the appeals board under the Government’s fast-track planning regime and a decision will be made within 16 weeks.

The appeals board’s positive assessment of the application should ensure its smooth passage.

The number of apartments envisaged is higher than the 500 Cairn initially indicated it would construct on the 3.49-hectare site (8.64-acre site) at RTÉ’s campus after its purchase in June 2017.

The site was sold at 43 per cent above the guide price of €75 million.

Before the 2017 deal, Cairn Homes chief executive Michael Stanley said: “If an opportunity like the RTÉ site comes along, it’s a once-in-a-lifetime chance to acquire a site of that quality.”

Speaking in March, Mr Stanley said that Cairn Homes hopes to commence construction on the former RTÉ site in 2020.

The plans will be lodged under strategic housing development (SHD) rules which allow developers to bypass local authorities and have their applications decided by the appeals board.

The process can save a year or more in the time required to have large-scale planning applications decided upon.

Cairn is building on 15 sites in the greater Dublin area and is on target to deliver 1,100 units this year.

1 Flights abroad ban could last all summer
2 Economic self-harm is at the root of populism
3 How much do Irish people earn? And what will Covid-19 do to our wages?
4 Why are markets booming when a crash is on the way?
5 Ireland faces 'deep downturn' this year and may not rebound until 2024 if there is a second wave
6 Nine more suing INM and Leslie Buckley over alleged data hacking
7 What is the truth about paying tax in Ireland?
8 Brexit: System agreed for Irish goods to skip checks on UK trade
9 Permission sought for €150m film and media campus in Wicklow
10 Drink tax row; no respite for Bewley’s; and mortgage U-turn at AIB
Real news has value SUBSCRIBE