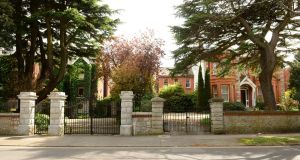 Homes on Ailesbury Road. Residents are looking to block development of 614 homes on former RTÉ land behind their homes. Photograph: Cyril Byrne

Three Ailesbury Road residents, including Pat Desmond, wife of businessman Dermot Desmond, have failed to get a High Court stay preventing An Bórd Pleanála ruling on whether or not to grant permission for 614 residential units on former RTÉ lands close to their homes.

The decision comes as Dublin City Council planners separately recommended that the planning board give the green light to the €338 million development.

The board is considering Cairn Homes Properties Ltd’s application for permission under the Strategic Housing Act 2016 (SHA) but has not yet decided it. Its decision is expected next week.

The stay on that decision was sought pending determination of a separate judicial review challenge brought by the residents over the board’s designation of the proposed development as strategic housing under the 2016 Act. The Act allows developers seeking permission for developments exceeding 100 units to apply directly to the board for permission, bypassing the local housing authority.

Mr Justice Denis McDonald had last July granted leave to the residents – Mrs Desmond, former Irish Sugar managing director Chris Comerford and businessman John Gleeson – to challenge the board’s decision. Their case includes claims about the validity of certain steps taken by the board in the process leading to the SHA designation.

They also claim provisions of the 2016 Act breach their rights under the Constitution and European Convention on Human Rights.

On Friday, Eileen Barrington SC, with Michael O’Donnell, instructed by Nap Keeling, for the residents, applied for a stay preventing the board issuing its permission decision pending the outcome of their challenge, which will be heard in November.

An Bórd Pleanála and Cairn Homes, respectively presented by Emily Egan SC and Rory Mulcahy SC, opposed any stay on grounds including that it would defeat the core purpose of the Act, the fast-tracking of housing developments.

In his ruling on Friday, Mr Justice McDonald said the Oireachtas clearly intended applications for permission for strategic housing development as defined should be pursued with urgency with view to addressing the housing and homelessness crisis here, he said.

Whether the 2016 Act is the appropriate way to do that was for the Oireachtas, not the court, to decide, he added.

Having balanced the various factors, the judge concluded the greatest risk of injustice lay in granting the stay and refused it.

In their action, the residents say the 611 apartments in nine blocks up to 10 storeys high as well as three townhouses, two cafes, one childcare facility and a private members club and gym constitute development of a scale and density far in excess of what is permitted under the Dublin City Development Plan and “totally out of keeping” with an area consisting of low rise Victorian or Edwardian type houses.

In a blow to the objectors however, the extensive chief executive report from city council planners state that they agree with the developers that the location allows for additional building height along the Stillorgan Rd, given the precedent for taller buildings along the road.

The report states that it “recommends that An Bórd Pleanála consider a grant of permission” as the proposal is consistent with the provisions of the Dublin City Council development plan.

In their report forwarded to An Bórd Pleanála, the planners have recommended that planning be granted in spite of a number of members of Dublin City Council expressing “serious reservations” over the plan.

The Ailesbury Road residents’ case is against An Bórd Pleanála, the Minister for Housing, Planning and Local Government, Ireland and the Attorney General, with Dublin City Council and Cairn Homes as notice parties.

1 How much state pension will I get next year?
2 Up or down – how much is your Local Property Tax this year?
3 Am I crazy to consider switching to an Ulster Bank mortgage?
4 Fall in mortgage drawdowns, Brexit threat to services, and advice on your pension
5 Mortgage drawdowns fall by almost a third
6 Brexit to curb services trade with UK, accountants group warns
7 Tesco takes to the skies with home delivery by drone
8 Ulster Bank to introduce new card payment controls on app
9 How long can Government afford to keep State pension age at 66?
10 Stocktake: Tesla profitable, but still expensive
Real news has value SUBSCRIBE