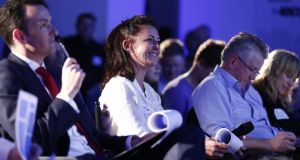 Looking on at the web summit. Technology firm Nitro, which announced plans to set up a Dublin office at last year’s web summit, has said it plans to also open a multimillion data centre in Ireland and accelerate its hiring plans here.

Technology firm Nitro, which announced plans to set up a Dublin office at last year’s web summit, has said it plans to also open a multimillion data centre in Ireland and accelerate its hiring plans here.

The announcement comes as Nitro closes a $15 million new fundraising round with Battery Ventures, a venture capital fund based in Massachusetts.

Nitro, which offers document productivity products, said this series B fundraising round takes its total funding to $21.6 million, after previously being backed by Australian fund Starfish Ventures. Michael Brown, general partner at Battery, joins Nitro’s board of directors following the investment.

John O’Keeffe, Nitro vice president for Europe, the Middle East and Africa, said: “A lot of this new funding will be focussed on the EMEA. A year ago we announced plans to hire 50 people, currently we are at 30. We’ve said we want to go to 100 in 18 months but this funding means we are going to go hire even faster.” Ultimately Mr O’Keeffe said Nitro hoped to have between 150 people and 200 people in Ireland within three years.

Mr O’Keeffe, a former Salesforce executive, said Nitro’s turnover hit $30 million this year, and about 35 per cent to 40 per cent of its sales came from Europe. He said both Bank of Ireland and AIB had started to use its products in the last year as an alternative to rivals Adobe and DocuSign.

Nitro also said it had hired Niall Gilmore as regional director EMEA. He previously worked for five years as Citrix Systems Inc’s Ireland country manager as well as in Microsoft.

Mr Gilmore said that Nitro was in “due diligence” to build the firm’s first data centre outside the United States in Ireland. “We have the green-light from our board to do this. It will be a multimillion investment in a location to be decided,” Mr Gilmore said.