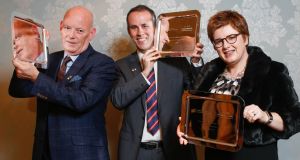 Organised by the France Ireland Chamber of Commerce (FICC) and NetworkIrlande, the awards recognise excellence within the Franco-Irish business community.

The award for best French company in Ireland was presented to Sodexo, the Irish arm of which delivers a range of services to clients in business, education, health and pharma among others. Across the Republic and Northern Ireland, Sodexo employs about 3,700 and had a combined turnover of €130 million in 2017.

The third award went to JCDecaux on the back of its work on the Dublin bikes scheme. The outdoor advertiser was lauded for “minimising the impact of their day-to-day activities on the environment”.

“The Ireland-France Business Awards reward French and Irish companies that contribute to the vitality of exchanges between our two countries,” said the French ambassador to Ireland, Stéphane Crouzat.

Mr Crouzat, the honorary president of the FICC, highlighted the growing importance of developing bilateral trade between the two countries.

“In the current international context, France and Ireland continue working together to reinforce our bilateral relation, strengthen the European Union and the European project. Our joint efforts to develop maritime connections between French and Irish ports exemplify this commitment and will support the dynamism in our trade relation,” he said.