Moving books and e-learning from Wexford to the world 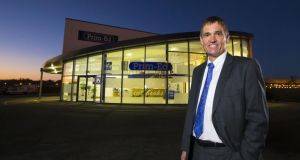 Séamus McGuinness has had many jobs – accountant, psychiatric nurse and snooker hall manager. Publisher has perhaps been his most successful though. The Wexford man founded Prim-Ed Publishing in 1994 and, in the 20 years since, the company has produced more than 1,000 titles. It employs 30 people in Co Wexford and a further 18 reps across Ireland and Britain.

McGuinness set up Prim-Ed following a telephone call from his brother Brian, who was working with RIC Publishing in Australia. “He was advising teachers who had set up their own publishing company for teaching resources. I took their products to market in Ireland.

“I had a cabin out the side of my house which I ran the business from. All my kids were the workers. Gradually I got a few staff on board to process orders.”

McGuinness quickly learned that shipping container-loads of books from Australia to Ireland was expensive and time- consuming. Also, even though the titles and resources were well received in Ireland and Britain, it was clear they were written for the Australian market, thus there were cultural and environmental differences.

He decided to print the titles in Wexford, and brought teachers on board to edit and rewrite the resource books to suit the Irish and British curriculums.

“We moved into our own premises around 1997-98 with several staff. At that stage, we also opened a premises outside Coventry in the UK. I moved my family over there for a few years as we were doing so much work there.”

In 2001, McGuinness decided to consolidate the business, and move production and warehousing back from Britain to Ireland. “I didn’t want two teams – one in the UK and one in Ireland – with the exact same skills doing the same job. I wanted one core team for everything. The move proved very successful.”

The company continued to expand, not just its titles, but into new areas such as digital learning and interactive whiteboards. “The digital revolution came, went and has now come back more sensibly. First time around it was just digital for the sake of digital. In the early days, we invested a lot in digital products such as CDs on literacy and numeracy. We spent a lot of time and money on IT programmes but the schools didn’t have the infrastructure to use them. They only just about had a shared computer for the entire school.”

At its peak in 2007, the company had a turnover of more than €7 million. However, that quickly dropped by about 20 per cent as a result of the economic downturn.

“We moved into many different areas as we were growing. We were the biggest suppliers of interactive whiteboards in the country at one stage.

“Suddenly lots of other companies started doing interactive whiteboards. Our prices were higher as we included delivery, installation and training. We were undercut in price and the bottom of the market went out for us. It took us a while to recover.”

To cope with the recession, Prim-Ed had to cut pay by 10 per cent and staff numbers from 36 to 22.

“The financial crisis hit us, as the discretionary spend of teachers, parents and schools decreased. We had to let many staff go and give the rest pay cuts. We were in the doldrums for two or three years.

“The recession drove us back into the UK market to a great extent. We looked at export markets more and how we could get our products out more effectively. We went to a lot of international book fairs and signed deals with a lot of companies outside Ireland.”

McGuinness says expanding into new markets was not easy, but the hard work paid off.

“Our sales into the UK have doubled in recent months and we’re also growing our presence with our literacy aids.”

McGuinness also acknowledges Enterprise Ireland, which stepped in to help following the onset of the downturn.

“2008 and 2009 were tough years for us and restructuring was required, but we found the assistance provided by Enterprise Ireland under its support programme invaluable. It played a significant role in future-proofing our business and building towards the current expansion phase.”

McGuinness says the resources produced by Prim-Ed’s team of Irish primary school teachers are being snapped up by English-speaking schools all over the world. “We now sell our products in the UK, the Netherlands, Belgium, Germany, Zimbabwe and South Africa.”

The company’s teaching resources are also used in most primary schools across Ireland.

Last autumn, Prim-Ed moved into new premises in New Ross, Co Wexford, and this year it hopes to expand its workforce in the southeast. It also hopes to continue its international expansion.