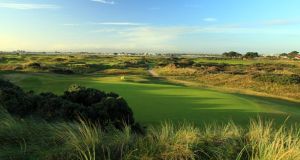 Portmarnock golf club. Following a judgment by the European Court of Justice, member-owned golf clubs can, in theory, apply to the Revenue for a VAT refund on green fees paid by non-members for the past four years. Photograph: David Cannon/Getty Images

Golf clubs could be in line for a windfall tax repayment on the back of a European Court of Justice decision on VAT and green fees. The judgment, made just before Christmas, could also make it cheaper for non-members to play a round at member-owned clubs.

A spokesman for the Revenue Commissioners confirmed yesterday that the tax authority is studying the ECJ’s judgment in a case involving Bridport & West Dorset Golf Club in England, in which it was decided that levying VAT when non-members pay green fees to play at member-owned clubs was not in line with EU law.

In the UK and the Republic, both of which are governed by the same EU VAT Directive, practice has seen VAT levied on green fees paid by non-members in member-owned clubs, while membership fees have been VAT-exempt.

Following the judgment, which marks the final stage in the Bridport case, member-owned clubs can, in theory, apply to the Revenue for a VAT refund on green fees paid by non-members for the past four years. It is thought up to 300 member-owned Irish golf clubs fall into this category, though exact figures have not yet been established by the Revenue.

Green fees vary substantially from course to course, but are likely to average around €40, including VAT. Depending on the year, the rate of VAT paid would have been either 9 or 13.5 per cent.

A spokesman for Revenue said it had received a handful of enquiries on the issue and was preparing guidance for clubs and their advisors. However, any claims made would need to be very specific in calculating the amount to be repaid. Claims would need, for example, to take account of VAT in other areas of the club’s activities offset against the VAT paid on green fees.

‘Unjustly enriched’
Revenue would also need to ensure a club would not be “unjustly enriched” by any repayment. In theory, VAT is a consumer tax so it might be argued that any repayment should ultimately land in the pocket of the golfer who originally paid it.

The Revenue spokesman acknowledged that the ruling could, in theory, also have application outside golf but he said it was “hard to imagine” such a situation in practice.

It will not apply to commercially-owned courses, which grew in number in Ireland during the boom. The ECJ case turned on viewing non-member green fees as “additional income”, a definition the ECJ did not accept, thus prompting it to rule in favour of the club.

Nobody from the Golfing Union of Ireland was available to comment yesterday.