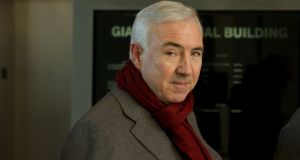 Seán Dunne: pursued by creditors owed about €700m, the Carlow developer filed for bankruptcy in the US in 2013 and was made bankrupt in Dublin later that year. Photograph: Steve Miller

The official overseeing the US bankruptcy of Seán Dunne has asked a court to approve an order compelling Google to hand over emails from two Gmail accounts belonging to the property developer.

Frustrated by the developer’s failure to hand over emails relating to his involvement in US property deals, Mr Dunne’s bankruptcy trustee Rich Coan has proposed a wide-ranging court order from the Connecticut bankruptcy court drawing the internet giant into their long-running legal battle.

Mr Coan, an attorney, has asked the judge to sign off on an order compelling Google and US telecoms company AT&T to produce emails from two Gmail email accounts listed in court records filed on Friday that contain his name.

He has also asked the court to compel Mr Dunne to produce a list of all email accounts he has used since January 1st, 2010, and to co-operate in producing documents sought under a subpoena served on the Carlow developer’s US lawyer in July 2016 and a court order of December 2016.

The trustee wants a voluminous set of documents from Mr Dunne as part of his legal action to recover tens of millions of euro that he claims the Irish developer fraudulently transferred to his wife, the former newspaper gossip columnist Gayle Killilea, under two agreements from 2005 and 2008.

Among the records sought are emails on Mr Dunne’s business affairs with Ms Killilea and John Dunne, his son from his first marriage, and documents showing Mr Dunne’s transfer of properties to Ms Killilea, including Walford, the Shrewsbury Road home he bought for €58 million in 2005.

Both Ms Killilea and Mr Dunne’s son are defendants in the action begun by Mr Coan in March 2015.

The Co Carlow developer claimed in a filing submitted to the Connecticut court last week that the Gmail accounts referred to by the trustee have not been used for years.

They had to be replaced, he alleged, because they were subjected to “a number of hackings and attempted hackings” made on behalf of the National Asset Management Agent, one of his creditors.

Mr Dunne has claimed that he complied with the trustee’s subpoena but Mr Coan has referred to emails Mr Dunne sent but failed to produce that emerged in a separate court case in New York.

Pursued by creditors owed about €700 million, the prolific boom-time developer filed for bankruptcy in the US in 2013 and was made bankrupt in Dublin later that year on an application taken by Ulster Bank, one of his biggest creditors.

Mr Dunne has argued that he was solvent at the time of the assets transfers to Ms Killilea and that he agreed to gift the assets, then worth a fifth of his fortune, in exchange for “love and affection”.

His Irish bankruptcy official, Christopher Lehane, secured a freezing order preventing her from reducing her assets below €50 million as part of his legal action to recover transferred assets from her.

The High Court was told in May that Ms Killilea had legally separated from Mr Dunne.

1 ‘I’m so lucky to be in the Caribbean – a million miles from Derry Girls’
2 Joint accounts: if one of us dies, can the other access the money?
3 Ryanair expects air fares to fall when flights take off again
4 Tax and the Pandemic Unemployment Payment: Your questions answered
5 Charlie Chawke plans 290 apartments and hotel on Goat pub site
6 Tobacco makers still trying to make a mint from Irish menthol market
7 ‘The recovery needs to be a full-scale economic renewal’
8 Minister calls on EU to act against tobacco firms ‘undermining’ menthol ban in Ireland
9 Brown Thomas and Arnotts shoppers will be able to book time slots for entry
10 Coronavirus: Technopath offers employers not-for-profit antibody tests
Real news has value SUBSCRIBE