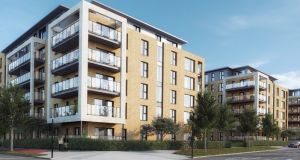 A planned Urbeo development in Citywest. The build-to-rent company is expecting to have a total portfolio of 1,900 units by March 2020. Photograph: Urbeo

Build-to-rent company Urbeo Residential said it has invested more than €400 million on nine deals in its first year in operation, which will deliver a portfolio of 1,300 rental units.

The company’s fund, which is 75 per cent owned by US investment firm Starwood Capital and has the Ireland Strategic Investment Fund (ISIF) as a minority backer, is understood to have committed €220 million to six previously-undisclosed deals in locations including Dublin’s city centre and the suburbs of Finglas and Citywest.

They are in addition to €180 million that was spent on three schemes – in Tallaght, Citywest and Maynooth, Co Kildare – that had previously been announced. Most of the schemes are under construction.

Richard Ball, partner at Urbeo, reiterated that the company’s goal is to build a €1 billion portfolio of build-to-rent assets.

“We expect to complete on several additional acquisitions by March 2020, growing to a portfolio of over 1,900 units,” Mr Ball said. “We are currently working on plans to launch our consumer facing brand which will provide an enhanced tenant experience operated by a dedicated professional landlord.”

Dublin is on track to see a record €2 billion of private rented sector (PRS) transactions in 2019, following a surge of activity in this sector in recent years, according to residential estate agents Hooke & MacDonald.

The scale of money flowing into this segment of the market has prompted criticism in some quarters that companies and funds are vacuuming up supply that might ordinarily go to would-be owner-occupiers, and that they are contributing to the homeless crisis given the power imbalance between landlords and tenants.

However, proponents say this sector is driving the development of residential projects, helping to boost supply at a time when rental costs are at an all-time high, and contributing to a professionalisation of the industry that was dominated before the property crash by small-time landlords.

Monthly rent costs rose at an average rate of 3.9 per cent to €2,044 in Dublin in the year to the end of September, according to the latest figures from property website Daft.ie.

Urbeo, which was co-founded by property players Frank Kenny and Bill Nowlan, said its strategy seeks to partner with builders or developers to deliver rental housing projects in well-serviced locations with good connections to employment centres. Its focus is on the mid-tier of the market in the greater Dublin area where there is strong rental demand, with the bulk of the portfolio to come from newly built developments.

The new brand that Urbeo is preparing to launch in the first half of 2020 is aimed at helping “to differentiate its offering with the guarantee to tenants of a professional landlord providing a high quality of service and 24/7 availability”, Urbeo said.