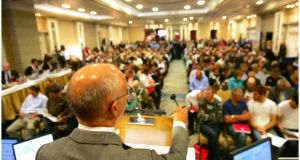 One of the first Allsop property auctions in 2011 in Shelbourne Hotel, Dublin Photograph: Bryan O’Brien

BidX1 traces its roots to the 2011 formation of the Allsop Ireland auction firm, a joint venture between British estate agent Allsop and Irish company Space Property Group (SPG) that held well-publicised “ballroom” auctions of distressed assets in the wake of the property crash.

The head of SPG, Stephen McCarthy, bought out his UK partners early last year in a deal estimated to be worth €4 million and rebranded the firm as BidX1 as he took the business into the field of online auctions. Since then, BidX1 has facilitated the sale of more than €500 million of Irish residential and commercial property.

“We have a clear organic growth strategy for the business and we will consider joint ventures and the right acquisitions to accelerate our plans,” said Mr McCarthy, adding that Pollen Street, formerly the private equity arm of Royal Bank of Scotland, has taken a stake of between 45 and 50 per cent in the business. He declined to reveal the value of the transaction.

“Pollen Street’s commitment is an endorsement of our core business proposition – driving change in the property industry through digitisation and innovation – and will facilitate the acceleration of our growth plans which will inevitably include integrating more financial services in the core platform.”

The company said it is the second-largest property auction house in Britain and Ireland following its purchase of British in-room auctioneers Andrews & Robertson. It recently opened an office in Cape Town in South Africa and is planning a joint venture with a large local partner.

BidX1 is also on track to open a Madrid office by the end of October in a country that, like Ireland, suffered a massive property bust in the past decade. The company aims to have an office open in Athens by the end of the year. Greece emerged from an international bailout programme last month, 4½ years after Ireland emerged from its rescue scheme.

The company employs 70 people between Ireland and Britain and sees that rising to 100 within the next six months, before doubling again “if all goes to plan” within a further 12 months, according to Mr McCarthy.

Investment firms that snapped up Irish property loans and assets in the wake of the crisis currently account for 55 per cent BidX1’s business in Ireland. The National Asset Management Agency has also used the online auction firm to sell some of its smaller lots in recent times.

However, the company does not facilitate the sale of primary homes that have been repossessed. It’s a policy that BidX1 will also stick to in other markets.

The stake sale marks Pollen Street’s third known investment in Ireland in a little over two years. The company bought Capitalflow, a specialist provider of asset-backed loans to small businesses in May 2016.