Block on grounds of former golf club to yield annual rent of about €4.4 million 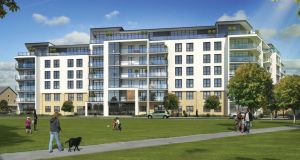 Most of the 129 two-bedroom apartments in the Neptune are expected to attract rents ranging from €1,800 a month to €2,000 for penthouses.

are to pay €72.5 million for a substantial block of apartments under construction in the grounds of the former Dún Laoghaire Golf Club off Upper Glenageary Road in Dún Laoghaire.

The London-based companies have exchanged contracts for the purchase of 197 apartments in the Neptune block which is being developed by the Cosgrave Group with funding provided by the National Asset Management Agency. The apartments are to be offered for rent under the “Vert” brand when they are completed in February, 2017.

Apartments rents have been rising steadily in Dublin city and suburbs in recent years because of the absence of new developments and increasing competition for the limited supply of units coming on the letting market. A substantial number of the built-to-rent developments have been sold to overseas companies since the property market crashed in 2008.

David Cantwell of agents Hooke & MacDonald, who handled the Dún Laoghaire sale, said the transaction was the first of its kind where an entire multi-family development aimed at the rental market was sold while under construction.

Most of the 129 two-bedroom apartments in the Neptune are expected to attract rents ranging from €1,800 a month to €2,000 for penthouses. A further 41 three-bedroom units are likely to rent from €2,200 to €2,500 for penthouses. There will also be 27 one-beds which should make from €1,400 per month to €1,500 for penthouses. The estimates suggest the rent roll should reach €4.4 million, which would give the new owners a net yield of about 6 per cent.

The six-storey apartment block will include a semi-basement car park and a large landscaped courtyard.

The Cosgrave Group has already built and sold 240 houses and 143 apartments in the 78-acre grounds now known as Honeypark. The site is expected to accommodate a further 1,400 homes.

There is a neighbourhood shopping complex alongside the entrance where the traders include Tesco, Boots pharmacy, L’Ombre Beauty, Costa Coffee and Base Pizza.

The park also includes a feature lake, a tree-lined boulevard, multi-sport play area as well as a children’s playground.