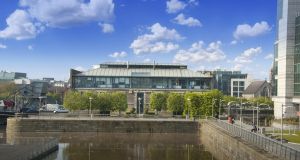 Stack B: the building occupies a prominent position overlooking George’s Dock and backing on to Custom House Quay in the IFSC

Trinity have occupied the building since 2016 having taken an assignment of the original lease held by AIB. Prior to the university’s arrival, the bank had used the premises as its trade centre since 1996 before relocating the majority of its staff over recent years to its Bank Centre headquarters in Ballsbridge, Dublin 4.

The sale of Stack B represents something of a coup for its vendor, German private investor Dirk Ippen. The €16 million paid by Trinity effectively doubles the €7.9 million he spent on acquiring the property in 2012 . Quite apart from securing a huge premium on his original capital investment, Mr Ippen has been in receipt of annual rental income of €735,000 from AIB and Trinity over the period. While Mr Ippen is a well-known German publisher with interests linked predominantly to newspapers in Europe, he is understood to have a number of property holdings in Dublin.

Stack B, or the AIB Trade Centre as it was more commonly known for many years, is one of the most recognisable properties in the IFSC. Located in a prominent position overlooking George’s Dock and backing on to Custom House Quay, the building served originally as a riverside warehouse. It was extensively redeveloped by businessman Denis O’Brien in the early 1990s into a modern three-storey over-basement office. Mr O’Brien sold the property subsequently to a group of investors.