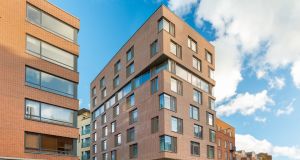 The exponential growth of Dublin’s tourism sector coupled with the city’s accepted status as a destination for international capital should result in a strong level of interest in the sale of the newly-completed 51-bedroom Staycity Aparthotel on Chancery Lane, near Dublin city centre.

Agent CBRE is guiding a price of €12.3 million for the property, offering the prospective purchaser the opportunity to secure a net initial yield of 4.5 per cent.

The subject property is securely let to Staycity, a highly-successful international aparthotel group under its core Staycity brand under a new 25-year lease agreement.

Founded in 2004 in Dublin, Staycity operates across 20 sites with nearly 3,000 rooms in Britain, Ireland and Europe. The company is already the largest aparthotel operator in Dublin with a total of 232 units across four properties. The Staycity group is committed to a pipeline of 4,500 additional units over the next 24 months, and its aim ultimately is to become Europe’s largest mid-market city aparthotel brand with 15,000 keys by 2023.

The Chancery Lane property is well-located in Dublin 8, south of the river Liffey, and just 850m from St Stephen’s Green, making it an ideal base for tourists to stay while visiting the city.

Dublin 8 itself is home to a number of notable historical attractions such as Christ Church Cathedral, St Patrick’s Cathedral and Dublin Castle. Other visitor highlights include the Guinness Storehouse at Diageo’s famous St James’s Gate brewery, and the Teeling Whiskey, Roe & Co, and Pearse Lyons distilleries. Trinity College Dublin is a short walk away.

Griffith College and the Dublin Institute of Technology are situated to the south at Portobello, and St James’s Hospital is 2km west of the property.

The Dublin 8 area has undergone extensive redevelopment over recent years, with an influx of investment and regeneration. Major projects either under way or in the process of being planned include the national children’s hospital and St James’s Gate Quarter, the €1 billion mixed-use scheme Diageo is seeking to deliver on a just over five-hectare (12.6-acre) portion of its Dublin brewery complex.

Dave Murray, who is handling the sale on behalf of CBRE says: “This is an excellent hotel investment opportunity. Staycity provides a much sought-after hotel investment grade covenant with over 24 years unexpired.”

Quite apart from its existing 51-bedroom capacity, the Chancery Lane investment comes with significant value-add potential with full planning permission to extend the property by one floor to include seven extra units. Planning for the development is valid until April 2024.

1 Who are Ireland’s 17 billionaires?
2 The entrepreneur who went from ‘total poverty’ to a Lamborghini
3 My father in a nursing home wants to gift me his house
4 Are there annual limits on inheritances or gifts to a child?
5 State subsidises public sector retirees to cover gap until State pension
6 Swiss police suspect Davos plumbers of being Russian spies
7 Aunt has bequeathed a house intended for my son to me
8 Pretax profits decline sharply at Tuam-based car tech firm
9 Nama lends Cosgraves €15m to fund huge apartment development
10 Q&A: Why has the pension age question suddenly become an election issue?
Real news has value SUBSCRIBE