Approval sought for $250,000 loan from Nama and Ulster Bank to fund investigation 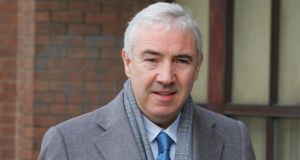 Seán Dunne’s US bankruptcy official wants another interest-free loan of $250,000 (€215,000) from the National Asset Management Agency (Nama) and Ulster Bank to fund his investigation into the developer’s finances.

The loan from Mr Dunne’s two largest creditors would, if approved by a court in Connecticut, bring the total amount borrowed by his bankruptcy trustee to $660,000 (€568,000) in the five-year-old legal proceedings.

Mr Dunne, with debts of $1 billion and assets of $55 million, filed for bankruptcy in the United States in March 2013. He was adjudicated bankrupt in Ireland four months later on an application by Ulster Bank.

The UK-owned bank, the lead lender behind his most ambitious project – the ill-fated redevelopment of Ballsbridge in Dublin – and Nama, the State agency that acquired his soured loans from Bank of Ireland and Irish Nationwide Building Society, are funding the US investigation into the Co Carlow man’s finances.

The dual bankruptcies of one of the country’s most high-profile developers during the property boom in the 2000s has involved investigations on both sides of the Atlantic and further afield, in Africa, into asset transfers amounting of tens of millions of euro to his wife, former newspaper gossip columnist Gayle Killilea.

“Because the debtor did business in Europe, North America and Africa prior to the petition date, the expenses associated with the trustee’s administration of the bankruptcy estate and investigation of the debtor’s assets and transfers have been and will continue to be significant,” Mr Coan’s lawyer said in a June 4th filing.

“The bankruptcy estate has insufficient resources to pay the fees, costs and expenses of the estate’s litigation,” said Mr Coan in an affidavit to the court.

He said the court actions seeking to overturn the transfers to Ms Killilea – which Mr Dunne has claimed were agreed in 2005 and 2008 at a time when he was solvent – may be the estate’s “most valuable asset”.

The loans to Nama and Ulster Bank will be repaid either with the dismissal of the case, if there are funds available or “as soon as reasonably practicable” after the estate receives more than $500,000 – whichever is earlier.

Mr Dunne has said he gifted his wife €100 million in return for “love and affection”. The assets included Walford on Shrewsbury Road in Dublin, bought for €58 million in 2005, the highest price ever paid for an Irish house.

In April, Mr Dunne lost his long-standing US lawyer when Connecticut-based attorney James Berman withdrew as his legal representative because the property developer had not paid fees due to his law firm Zeisler & Zeisler.

Mr Berman had represented the Co Carlow developer during some of the businessman’s high-profile appearances in his US bankruptcy case, including his December 2013 questioning by Mr Coan and US lawyers representing Nama and Ulster Bank over the asset transfers to his wife.

The US attorney warned in a court filing that Mr Dunne’s rights may be “adversely affected” if he fails to engage another lawyer. A separate hearing will be held about Mr Berman’s withdrawal on July 24th.