Seán Dunne-Gayle Killilea asset transfer trial kicks off in US 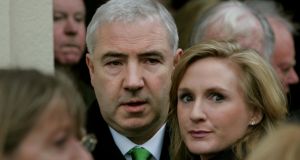 A United States courtroom will serve as the setting this week for one of the most significant legacy cases from the Irish property crash.

The US district court case opens before Judge Jeffrey Meyer and a jury. It is scheduled to last more than three weeks with witnesses including Mr Dunne, his son and Ms Killilea due to testify.

Lawyer Richard Coan, Mr Dunne’s US bankruptcy trustee, took the case. He claims that tens of millions of euro in property and other assets, including Ireland’s most expensive house – Walford on Shrewsbury Road in Dublin, purchased for €58 million in 2005 – were fraudulently transferred to Ms Killilea and concealed in her name.

Mr Dunne has admitted he transferred €100 million or about a fifth of his fortune when he was at his wealthiest to Ms Killilea but that the transfers took place at a time when he was solvent and had adequate capital.

The 64-year-old businessman has previously said that he transferred the money for “love and affection and children”, “having a happy marriage”, “cooking the odd meal” and “washing the odd shirt”.

Mr Coan has accused the Dunnes of operating a long-running scheme to conceal assets from him and creditors “through the use of shell companies, trusts and other straw men” to move assets and change the ownership of assets in the US, Ireland, continental Europe, the Isle of Man, Cyprus and South Africa.

He has alleged that they launder their money through “multistep financial transfers, using a constellation of financial institutions located throughout the world, directed by Dunne’s financial control person, James Ryan”.

The trustee intends to call the Dublin-based Mr Ryan during the trial.

Mr Dunne was one of the highest profile casualties of the 2008 property and banking crash. He has been embroiled in bankruptcy proceedings in both Ireland and the US since 2013.

He filed for bankruptcy six years ago in Connecticut, where he lived at the time, owing more than €700 million, mostly to the National Asset Management Agency, the State agency that acquired his business’s property loans from the Irish banks, and UK-owned Ulster Bank, one of his biggest lenders.

The trustee is seeking the recovery of assets for the benefit of the creditors, including the Irish State through Nama.

Mr Dunne has testified that the transfers arose out of two agreements reached between him and Ms Killilea, a former newspaper columnist, in 2005 and 2008. The first, he has claimed, was executed during a holiday to Thailand and the second in Dublin and witnessed by his financial adviser Ross Connolly.

Mr Connolly, former chief financial officer at Mr Dunne’s boom-time company Mountbrook, is among a number of witnesses due to travel from overseas to give evidence.

Details of the lifestyles lived by Mr Dunne and Ms Killilea are likely to come under scrutiny during the much-anticipated trial, the culmination of years of complex legal interactions between the two sides.

Mr Coan has said in pretrial court filings that Mr Dunne has enjoyed “a lavish lifestyle” having owned and lived in properties in “the exclusive Ballsbridge section of Dublin”, at the K Club golf resort in Ireland, in Geneva, Paris, Connecticut and “presently in a mansion in London known as Belgravia”, which, he says, was purchased and developed by Mr Dunne and Ms Killilea in 2015.

“Despite his bankruptcies, his lifestyle remains virtually unimpaired with Dunne continuing his property development business unabated, living in multimillion-dollar mansions in Greenwich, Connecticut and London and travelling around the world,” he said.