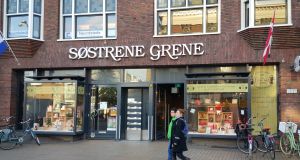 A Søstrene Grene outlet in the Netherlands: the 44-year-old company has 157 shops worldwide.

If Ikea and Flying Tiger had a love child, its name might be Søstrene Grene, a Danish home and craft chain that has just opened its sixth shop in the Republic on Limerick’s Bedford Row.

Søstrene Grene began in 1973 in Aarhus, Denmark’s second city, where founding sisters Inger and Ruth Grene combined their love of interiors and crafts into one store. The recent Limerick opening brings the number of shops worldwide to 157, in countries including France, Germany, Spain, Iceland, Japan and the Nordic states.

Limerick is the latest store operated under a joint venture between the Danish company and Irish-American couple Niall and Heather Lawlor. She is Boston-born and has worked with Citibank; he’s Irish and was managing director of GameStop’s northern Europe operation, having worked with the company for 14 years.

They discovered the store on a Christmas shopping trip to Copenhagen when they were living across the Oresund Bridge in Malmo, Sweden.

They loved the concept and talked about opening one when they moved back to Ireland. But that was in 2011, a year in which five companies went to the wall every day, according to Vision-net. It was a “grim” time for retail, as Niall recalls.

“It reminded us of the five-and-dime stores in the US, a kind of lucky-dip idea where you were never really sure of what you might buy. Every time you walked in you discovered all kinds of things. The point of difference was that this business model also had Scandinavian good looks in terms of its design offer.”

The difficulty was showcasing the concept to landlords. While Søstrene Grene has been well known in Denmark for decades, it began expanding internationally only about five years ago.

The Lawlors found their first site in Dún Laoghaire in December 2015, at 89 George’s Street Lower, near where they live.

At 2,500sq ft, the shop was big enough to properly display the products as well as to set up its maze layout – a winding-aisle idea that keeps customers in the shop for longer.

“The idea is to have people browse for longer,” Niall says, “and it helps us showcase product on three sides at once. We also play classical music to create a relaxing environment where you can hear yourself think.”

The success is down to the low price point, he says. The average spend is just €10 per customer, but the gorgeous accessories and small furniture pieces – dining chairs, console tables, plant stands – whose arrival day is announced on social media, have customers queuing for hours on the morning the stock arrives (September 7th, since you ask).

In late spring, luxury velvet upholstered dining chairs priced at €61.88 caused a Twitter meltdown and were snapped up within hours.

The Lawlors would like to grow the chain to about 10 shops, but rising rents are a constraint, Niall says.

“Rents have increased 15 per cent in the 18 months we’ve been trading.”