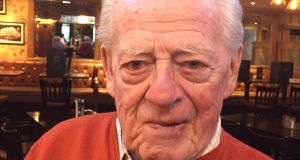 The well-known and hugely-respected commercial property agent, Ronnie Cregan (1933-2019), died peacefully on December 20th with family at his side. Ronnie, who was a member of the Society of Chartered Surveyors Ireland (SCSI) and Miavi – following the society’s amalgamation with the Irish Auctioneers & Valuers Institute – was a commercial property agent in Dublin for more than 50 years. He started out his apprenticeship with North’s estate agents before striking out on his own with the establishment of Cregan & Partners. Based initially on Leeson Street next to the Burlington Hotel, the firm later moved its offices to Warrington Place alongside the Grand Canal in Dublin 2.

Over the course of a lengthy career, Cregan developed and maintained a list of loyal clients and friends, including the well-known home builders, McInerney, for whom he bought and sold land across Rathfarnham, Knocklyon and Tallaght in south Dublin, and the men’s fashion retailer, Smart Brothers, who had stores on both Grafton Street and Henry Street and shopping centres including the Ilac, the Square in Tallaght and at Nutgrove in Rathfarnham. For many years, he also handled the auctions of bicycles, cars and other unclaimed items of stolen property on behalf of An Garda Síochána at the force’s Phoenix Park headquarters.

In 2000, Cregan returned to North’s on a consultancy basis before fully retiring in 2004.

Prior to his death last month, he reflected on how much he appreciated the unstinting loyalty of all his friends and clients whom he said had always stuck with him through both the good and the bad times. Ronnie Cregan will be remembered by his family, friends, and former clients as a man who knew his craft and loved what he did. A month’s mind Mass will take place at 10am this Sunday, January 19th, at the Church of the Good Shepherd, Churchtown, Dublin 14.