Ronan gets go-ahead for apartments in docklands 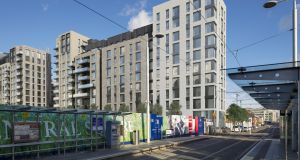 A computer-generated image of the Spencer Place apartment scheme in the Dublin docklands.

Located immediately adjacent to Salesforce’s new European headquarter campus, which is under construction, the units at Spencer Place will be distributed across two blocks rising in height to 11 (40.5m) and 13 storeys (47m) respectively.

While RGRE had permission in place previously for a residential scheme at the docklands campus, the original planning consent had provided for 349 apartments and a 100-bed aparthotel in two seven-storey blocks. An Bord Pleanála’s approval of RGRE’s revised plan for the site will see the delivery of an additional 115 apartments and the replacement of the proposed aparthotel with 200 shared bedspaces across a total of 120 bedrooms.

The apartments have been designed to cater for the upper end of the residential rental market, and will include a hotel-style lobby reception with concierge desk manned on a 24/7 basis, an electric car share club, a rooftop residents’ lounge and garden with fitted barbeque facilities, a penthouse residents’ gym, private dining spaces and a multimedia room.

Upon completion, the residential units will account for 370,354sq ft (34,707sq m) of the 717,000sq ft (66,599sq m) of space RGRE is set to deliver as part of its wider mixed-use scheme at Spencer Place. The balance of the development will accommodate Salesforce’s new urban campus, and a new hotel operated by Dalata which will be known as the Samuel.

RGRE and its partners, Colony Capital, are in the process of selecting a buyer for the Spencer Place residential scheme, having invited a number of institutional investors to acquire the portfolio by way of a forward-funding deal at a guide price in excess of €250 million.

Welcoming An Bord Pleanála’s approval of its application for the additional residential units at Spencer Place, a spokesman for RGRE said: “This is an example of the progressive approach to planning and land use we have been advocating for in Dublin and which we have consistently urged Dublin City Council to adopt. Permitting height and density in appropriate locations, such as Spencer Place, is in line with government policy as set out in the Urban Development and Building Height Guidelines. It’s also the right thing to do for those who live and work in Dublin and who don’t want to accept suburban sprawl, traffic congestion and lengthy commutes as the norm.”

In a separate, albeit related, development, RGRE is in the process of seeking permission from Dublin City Council to increase the height of Salesforce’s new European headquarter office building at the front of the site from nine to 13 storeys.

Having rejected the developer’s two previous efforts to raise the block’s height from nine to 11 floors, the council subsequently conducted a review of building heights in the North Lotts and Grand Canal Dock Strategic Development Zone (SDZ). Following this, it submitted a proposal to An Bord Pleanála on May 31st last, recommending that structures of up to 13 storeys be permitted in the area to the front of the Salesforce campus site at Spencer Place. The board has yet to reach a determination on the matter.