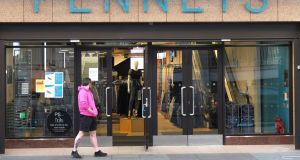 Penneys on Dublin’s O’Connell Street last week. The clothing chain said this week it would suspend paying rent on its 37 shops in the Republic. Photograph Nick Bradshaw

Retail landlords fear rents will dry up as all but essential stores shut up shop amid the Covid-19 crisis.

This week, clothing chain Penneys confirmed it would suspend paying rent on its 37 shops in the Republic to ease the damage done to its business by lost sales.

In Britain, Intu Properties warned it could be unable to make debt repayments due shortly, as tenants of shopping malls it owns in locations such as Manchester and Essex fail to pay rent.

Industry sources expect that the closure of all shops, barring those regarded as essential, such as supermarkets, convenience stores and off-licences, will hit retail rents.

“No official conversations have happened yet, but there is a feeling that it is just a matter of time,” said one property manager who works for several big shopping centre owners.

The source added that staff were contacting clients and tenants in advance to establish how problems could be mitigated as they arose.

Hammerson, the UK-based co-owner of the Republic’s biggest shopping mall, Dundrum Town Centre, among other properties, has not commented on the position here.

Much of the rent that the company collects from tenants does not fall due until the next quarter, which begins on April 1st. Hammerson has not indicated if it is in talks with retailers in any of its properties.

Irish Life, which owns the Ilac Centre and Swords Pavilions in Dublin in partnership with Hammerson, as well as several properties on Grafton Street, one of the capital’s main shopping thoroughfares, has not made any statement about rents.

However, the company is understood to have been contacting tenants in an effort to see what steps it can take to ease the pandemic’s impact on both its business and the retailers involved. It is said to be assessing the situation from “retailer to retailer”.

Davy Real Estate, part of stockbroking firm Davy, which took full control of Stephen’s Green Shopping Centre in Dublin last year and owns the Nutgrove mall in the city’s suburbs, has not commented.

Sources point out that suburban properties with large supermarkets as anchor tenants may not suffer as much as those in city centres.