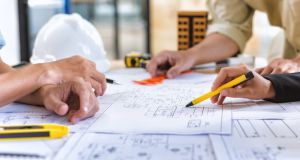 An Bord Pleanála has turned down the Nocsy application after finding it would represent an unplanned and haphazard form of development on lands outside the Newcastle Local Area Plan development boundary. Photograph: iStock

An Bord Pleanála has refused planning permission for an aparthotel aimed at accommodating short-term contract workers at Rathcoole, Co Dublin.

Nocsy Ltd submitted plans for the 156-suite aparthotel, saying it was aimed at accommodating contract and part-time workers in nearby industrial estates.

Recently elected Fine Gael MEP Frances Fitzgerald was among those who raised concern about the proposal.

The applicants said there is a lack of accommodation for such short-term workers in the vicinity and the maximum stay in the aparthotel would be two months.

Consultants for Nocsy, Thornton O’Connor Town Planning (TOCTP), told the appeals board that Greenogue and Aerodrome Business Parks are significant employers in the area, accommodating 400 companies and employing 7,000.

The consultants said local businesses have expressed frustration about the lack of availability of short-term accommodation for employees.

TOCTP also said the proposal “would be more affordable than staying in hotels and more suitable than bed and breakfast accommodation”.

South Dublin County Council refused planning permission for the application on 10 grounds earlier this year, resulting in Nocsy taking the decision to the appeals board.

However, the appeals board has turned down the application after finding that it would represent an unplanned and haphazard form of development on lands outside the current Newcastle Local Area Plan development boundary.

The planning inspector in the case, Michael Dillon, said the proposal would set an undesirable precedent for similar-type development on lands immediately outside the Newcastle Local Area Plan development boundary, which would result in unsustainable ribbon development and urban sprawl.