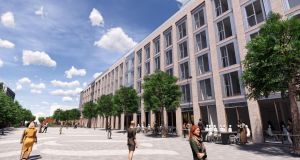 Plans by Premier Inn owner, Whitbread, to open more than 2,500 hotel rooms in Ireland have stepped up a gear with the announcement of its fifth site in the capital.

Working with Bain Capital Credit, Whitbread has secured a site for a 151-bedroom Premier Inn hotel in the Distillery Quarter at Newmarket Square in Dublin 8. The deal increases the group’s secured development pipeline in Ireland to more than 1,000 bedrooms.

News of the deal comes just eight weeks after it announced its intention to work with development partner, Red Rock Developments, on the delivery of a new 108-bedroom hotel at Gloucester Street in Dublin’s south docklands.

Commenting on Whitbread’s latest transaction, Kevin Murray, head of acquisitions for Premier Inn in Ireland, said: “Securing the Newmarket site and reaching over 1,000 bedrooms in the pipeline is a significant landmark for us as we aim to be the number one budget hotel chain in Ireland.

“The site is within an exciting regeneration area and we’re confident it will trade strongly, being right across the street from the Teeling Whiskey Distillery and within walking distance of the Guinness Storehouse, St Patrick’s Cathedral and Christchurch.”

David Cullen, managing director at Bain Capital Credit, said: “As a multi-sector investor deploying capital efficiently and at scale, we fundamentally believe in the potential of the Irish hotel real estate market and in the inherent sustainability of Dublin’s thriving tourist economy.”

Whitbread has also announced the appointment of Matt Gent as its new development manager for Ireland. Mr Gent takes up the role this month after five years as a project and programme manager with Whitbread in the UK and several years’ experience prior to joining Whitbread including roles at JLL and Gardiner + Theobald.

Since signalling its intention to expand here in 2018, the company has signed deals for five Premier Inn hotels in Dublin city centre – at South Great George’s Street, Jervis Street, Castleforbes Business Park, Gloucester Street and now Newmarket Square. The hotels are a mixture of freehold and leasehold acquisitions and will open from early 2021 onwards.

Moving beyond the capital, Whitbread and development partners Greenleaf Group and Warren Private, agreed a deal last November for a 183-bedroom hotel in Cork city centre. The new hotel at Morrison’s Quay is the company’s first site in Ireland outside Dublin.

1 IMF chief says pandemic will unleash worst recession since Great Depression
2 Irish Times cuts senior manager and editor pay by up to 30%
3 Lockdown exit: How can Irish economy reopen without big health risks?
4 Ireland’s financial reputation: why this time it is different
5 Debenhams to shut stores in Republic with loss of 1,000 jobs
6 TCD to spend €200,000 on Chinese student recruitment drive
7 Deliveroo branches into grocery deliveries in Ireland
8 Bank of England to directly finance UK’s Covid-19 spending
9 Post-Covid, welfare of majority not the privileged is crucial
10 Property market has not felt full impact of Covid-19, warns Sherry FitzGerald
Real news has value SUBSCRIBE