Douglas Village Shopping Centre has been closed since the fire of August 31st, 2019 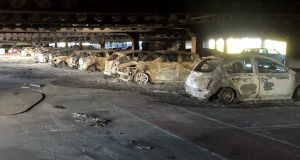 The aftermath of a large fire in the multi-storey parking facility of the Douglas Village Shopping Centre in Cork.

The owners of a shopping centre in Cork are suing for more than €30 million damages after an allegedly defective Opel Zafira car went on fire in the centre’s car park, allegedly resulting in a major fire and “immense damage” to the centre.

The Douglas Village Shopping Centre has been closed since the fire of August 31st, 2019 and is not expected to reopen until autumn 2020 at the earliest, the Commercial Court was told.

The costs of demolition and rebuilding of the car park, associated business interruption and other aspects of repair are expected to exceed €30 million and the calculation of the amount for loss and damage suffered is continuing, the owners say.

While nobody was injured as a result of the fire, a determination of liability issues would assist in deciding other claims by property and car owners arising from the fire, they say.

Mr Justice David Barniville agreed on Monday to fast-track the case in the Commercial Court brought by Avoncore Ltd and Canmont Ltd, trading as the Douglas Village Shopping Centre.

It is against Irish-incorporated Leeson Motors Ltd, which allegedly distributed and sold an Opel Zafira B Model car, with a 06 C registration, manufactured and designed by another defendant – Adam Opel GmbH, based in Germany.

Vauxhall Motors Ltd, incorporated in the UK, is also sued. It is claimed that company was responsible for the conduct and management of recalls of the Zafira B vehicles in the UK and had provided direction to and/or liaised with Leeson Motors Ltd with regard to the recalls conducted in Ireland.

In the proceedings, the plaintiffs, represented by Brian Kennedy SC, allege, at the time of the fire incident, the Opel Zafira car was owned by Mohsen Al Khafagy, of Lehenaghmore, Cork, having been purchased by her in Cork about June 2014.

It is claimed Mrs Al Khafagy, having parked in the car park of the centre, was about to get out of the car to go shopping when she noted smoke at the front exterior of the car. It is claimed the car went on fire, causing a “major conflagration”, resulting in “immense damage” to the centre.

The plaintiffs allege the fire originated in and/or was caused by the defective manufacture of the car, in particular the HVAC system used in the car.

It is alleged the severe resulting damage from the fire was caused and/or occasioned by the negligence and/or breach of duty of the defendants in and about the design and manufacture of the car; in/or about the design and implementation of the recall of Opel Zafiras; and/or in and about failure to inform Mrs Al Khafagy of the danger, of which they were aware or ought to have been aware, that the car posed to her and her family and to third parties such as the plaintiffs.

The case includes a claim for aggravated and/or exemplary damages on grounds they allegedly knew and/or recklessly exposed Mrs Al Khafagy and members of the public and property owners to a risk of fire and fire damage.